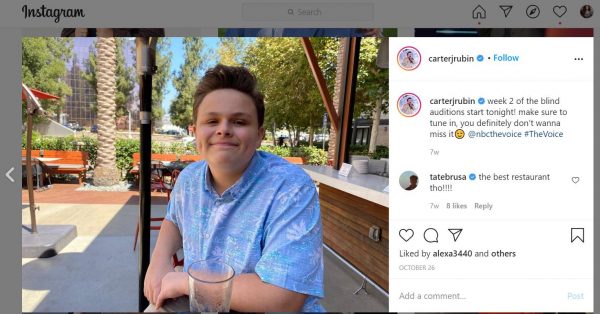 Season 19 winner has been crowned and the winner is none other than 15-year-old Carter Rubin of Team Gwen.

After two moving finale performances, Carter gained the largest number of votes from American viewers. His first rendition was Miley Cyrus’ “The Climb.” The second one was surprisingly his own original song called “Up from Here.”

Carter faced tough competition from other gifted finalists such as Desz from Team Kelly, Jim Ranger from Team Blake, John Holiday from Team Legend and Ian Flanigan also from Team Blake. All of them rendered excellent performances on Monday night but Carter was preferred by the viewers.

Coaches John Legend and Gwen Stefani asked Carter to join their team and he ultimately picked Gwen as his mentor. Carter’s win is her first and only victory from 2007 when she joined The Voice as coach/mentor. This victory is all the sweeter as her protege won against her fiancé Blake Shelton’s protege.

Carter’s fans posted online. One viewer tweeted, “Congratulations on the win!! Carter has been a favorite since the Beginning!! He so talented to be so young” while the other said, “Way to go GWEN! Carter is phenomenal!!!”

Jim Ranger’s fans posted their disappointment. One said, “Ok, Carter is Good. But it should have been JIM RANGER!!” Another fan tweeted, “@ Jimranger is the winner in our hearts.”