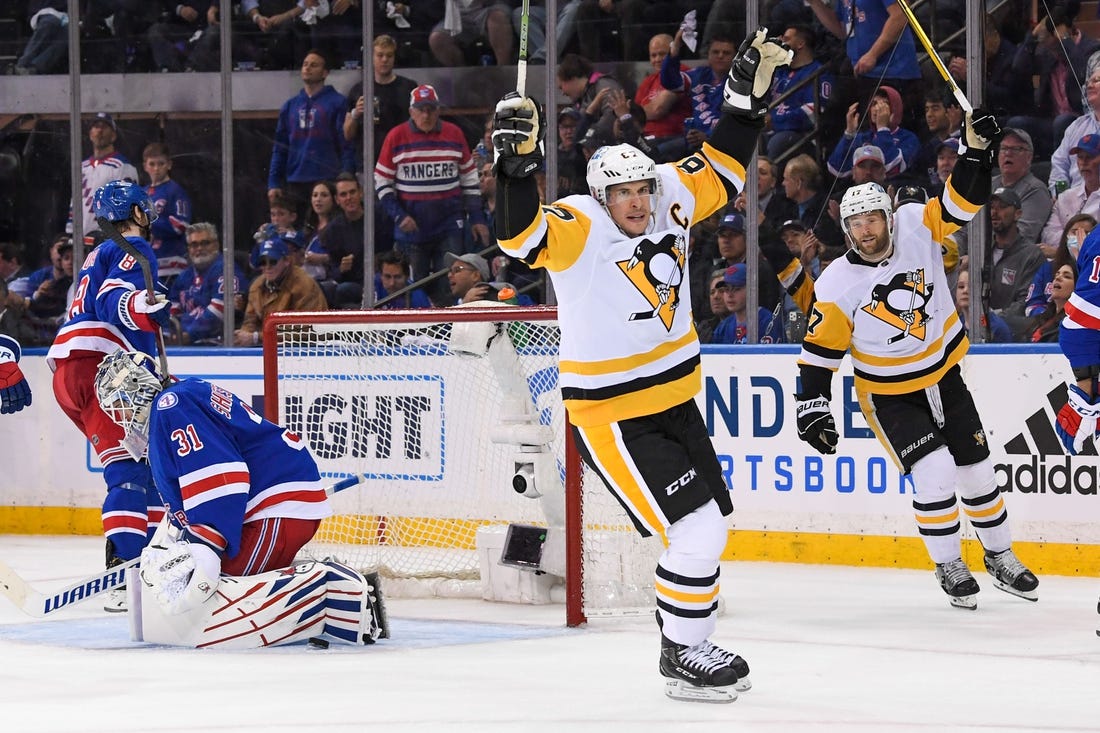 The first-round playoff matchup between the Pittsburgh Penguins and visiting New York Rangers has heated up off the ice going into Game 4 on Monday.

But they’re not sniping at each other. Rather, both clubs are expressing faith in their own game.

Perhaps that is at least partly due to the way the series has arrived at the Penguins leading 2-1 — a 4-3 triple-overtime Pittsburgh win, a 5-2 Rangers win and Saturday, as the series shifted to Pittsburgh, a 7-4 Penguins win that featured New York erasing a three-goal deficit only to have Pittsburgh seal it with three goals in the third period.

Game 4 also is in Pittsburgh.

“We believe in ourselves,” said Penguins goaltender Louis Domingue, the organization’s third-stringer who has been pressed into starting duty because of injuries.

“Once you enter the dance, any team can win. We entered the series maybe as the underdog, but we certainly feel like we belong.”

Domingue came in cold in the second overtime of Game 1. Pittsburgh’s No. 1 goalie Tristan Jarry skated separately from the team Saturday morning, but his return from a suspected broken foot does not seem imminent. Casey DeSmith, who pulled himself out in Game 1, had core muscle surgery over the weekend and is out for the playoffs.

In addition to Domingue stepping up, Pittsburgh finally started getting secondary scoring in Game 3.

Saturday, while Guentzel picked up his fourth goal on an empty-netter, four others notched their first goals of the series.

“Obviously, when you get balanced scoring, it certainly helps your chances to win games,” Penguins coach Mike Sullivan said.

The Penguins on Saturday chased Rangers goaltender Igor Shesterkin, widely considered the Vezina Trophy favorite, after he gave up four goals on 15 shots in the first period.

It seems highly likely New York will come back with Shesterkin for Game 4.

“Igor’s been our MVP all season, as everybody knows, and in the playoffs,” Rangers coach Gerard Gallant said. “I thought we’d give him a little rest (Saturday) and, hopefully, spark our team, and it worked.”

Until it didn’t, as Pittsburgh pulled away from the 4-4 tie.

“That’s the way she goes,” he said. “We’ll get back at them again next game.”

New York forward Chris Kreider dismissed any notion that his club was in any way a no-show early in Game 3. It was a lack of cohesion, he said.

“I don’t think we were playing together, especially (for it being) this point of the season,” Kreider said. “Effort is not something you question; it’s a matter of working smart, not hard.”

The Rangers were 0-for-3 on the power play Saturday after going 2-for-5 over the first two games.

“In a series, you have to adjust,” New York forward Ryan Strome said. “They made some good adjustments, so we have to adjust and be ready for Game 4, on the power play and five-on-five.”

Like the Penguins, the Rangers are playing short-handed because of injuries. Forward Barclay Goodrow has been ruled out for the series, and defenseman Ryan Lindgren has missed the past two games.