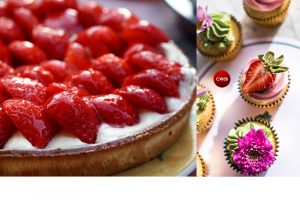 Adapted from The Pie and Pastry Bible

Put 1/3 of the butter into the freezer in a medium-sized mixing bowl.

Whisk the flour and salt together. Mix in 2/3 of the butter with a pastry cutter until it looks like course meal. Once the butter is mixed with the flour, minimize exposure of the dough to your warm, warm hands, or you will melt the butter.

Place the butter/salt/flour mixture into a gallon-sized zip-top bag. Add in the last 1/3 of the butter and put the bowl back into the freezer. Get rid of all the air you can and seal the bag. Take your trustiest rolling pin and roll the contents of the bag until the butter turns into flatten flakes. Place the bag into the freezer for 10 minutes or thereabouts. The goal is to reverse any melting from the butter and make it reasonably solid again.

Take out the bag and the bowl, and transfer all of the dough to the bowl. You will need to scrape the sides of the bag, as the butter will have stuck to it during the rolling. Sprinkle the heavy cream into the mixture and mix. I use a silicone spatula to mix, as it won’t melt the butter and it’ll resist some of the sticking.

Put the mixture back into the bag and seal, removing most of the air as before. Knead the dough inside the bag with your fingertips until it sticks together. When you pull it, it should stretch a bit.

Divide the dough into two 6″ discs and refrigerate for anywhere from 1 to 24 hours. 8 hours is ideal. Although you’ll only need one of these discs for this pie, as it was a competition, I baked two in case something went horribly, horribly wrong.

Preheat the oven to 450° and let sit at that temperature for another 20-30 minutes.

Roll out the pie dough into a 13″ circle and place into the pie pan. Shape the top as you like. Freeze for at least 20 minutes.

Dock the sides and bottom of the dough. Crumple a piece of parchment paper, unroll it, and place over the pie, fitting it down close to the dough. Put in your dried beans, rice, or pie weights. Bake for 20 minutes. Carefully remove the weighted parchment paper, cover the top edge of the crust with aluminum foil, and bake for another 5-10 minutes, until the inside of the crust has a light golden tinge and feels more like crust than dough. Let cool for 3 minutes, then brush on the egg white to the sides and bottom. Let cool completely.

Put the white chocolate into a microwave safe dish and microwave on high for 20 seconds at a time. At the end of each, stir. Repeat until there’s more melted bits than solid bits, then keep stirring until all of the solid bits turn into melted bits. Let cool to room temperature.

In a small mixing bowl, mix the cream cheese with an electric mixer until it’s somewhat fluffy and whipped. Add in the cooled white chocolate and mix. Add in the sour cream and mix until combined. Cover the bottom of the pie with this mixture.

Lightly crush the strawberries with a fork in a small saucepan. Add the sugar, water, salt, lemon juice, and cornstarch. Bring to a boil. Simmer for 1 minute. Pour into a bowl and let cool to room temperature. Stir occasionally during the cooling process. Once cooled, pour over the bottom later of the pie.

Your strawberries should have the tops cut off so that they could stand up on the a flat surface. Place these point side up on top of the pie.

In the small saucepan which has been washed and dried, melt the currant jelly until it is melted. It will bubble. Strain into a glass, which will involve a lot of pressing with a spatula. Stir in the St. Germain. Brush this mixture onto the fresh strawberries.

Cool in a refrigerator for an hour or two or overnight. Slice and eat, or slice and serve to judges. If the latter, try to save yourself a slice. 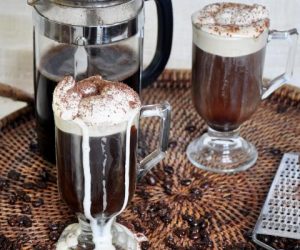 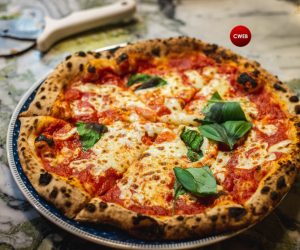 Caramelized Pork Belly & Shrimp
This flavorful Vietnamese dish is easy to make and does not need any spices, as the flavor comes from the caramelization process. It is...
Caramelized Onions, Thyme & Fontina Crostini
I love crostini! Whats not to love about a beautifully crisp slice of baguette topped with something sweet or savory? If you are hosting a...
Caramelized Onion Roast Chicken
Winner winner chicken dinner. One pan, one hour, whats not to love? Ingredients 8 skin on chicken drumsticks 2...
Caramel Pecan Brownies
Without doubt, these are the most delightful tasting brownies that we’ve ever had the pleasure of tasting, and the best thing about them...
Caprese Stuffed Chicken
Quick, easy, and most importantly - delicious! Caprese Stuffed Chicken is a perfect weeknight meal that requires few ingredients and very...
Calzone Pizza
Calzone pizza is a scrumptious pocket of pizza dough filled with various fillings. There is no rocket science behind making one yourself!...
Cannellini Bean and Smoked Turkey Stew
This simple stew is all about the smoked turkey. If you've ever wondered what to do with those smoked turkey drumsticks, wings, or even...
Caponata Di Melanzane
This is one of Sicily's most popular and versatile aubergine dishes. You can eat it with bread, as part of an antipasto, or as a side dish...
Calf foot with chickpeas.
I love that recipe, it's just too delicious! It's a recipe from Burkina Fasso, that my friend Rita prepares! In Marocco, that recipe...

Quintessential Quinoa
Photo Credit:- Cosori Air Fryers You’re about to meet one of your favorite new dishes. Light, fluffy, and springy, quinoa is one of the healthiest...
Spectacular Salsa
Photo Credit:- Cosori Air Fryers I know what you’re thinking: it’s unusual to cook salsa, much less pressure cook it. But this technique stews...
Cheap Steak With Mushroom Sauce and Brown Rice
Simple, affordable dinner. Used what I had in my apartment. Enjoy. Ingredients 2 steaks--cheap ones will do just fine 1...
Split Pea Soup
Photo Credit:- Cosori Air Fryers When I was a kid, I was a bit skeptical about this one. The name is enough to make any seven-year-old giggle and...
Chicken Adobo
Photo Credit:- Cosori Air Fryers This is by far the most famous and most popular of all Filipino dishes. But every Filipino cook has his or her own...
Chardonnay And Herb Fagioli Soup With Chili Chive Croutons
Many chefs have a version of a Fagioli soup. Here's my savory rendition with fresh herbs, white wine, homemade chicken stock, and topped off with...
Taiwanese Spicy Beef Noodles
Photo Credit:- Cosori Air Fryers Beef noodles are often considered Taiwan’s national dish. This recipe comes courtesy of Linda Shiue, or rather...
Lohan Mixed Vegetables
Photo Credit:- Cosori Air Fryers Commonly known as Buddha’s Delight or lo han jai, this vegetarian dish is eaten on the first day of the Chinese...
Char Siu Pork Fried Rice
On Tuesday I featured some delicious Char Siu (Chinese Barbecue) Pork Buns. They highlighted sticky, crispy, and tender pork tenderloin from Recipe...
Char Siu
This method is often traditionally called “red cooking,” due to the red tinge pork can get when roasted, which is naturally enhanced by soy...
Championship Wings
Garnishes: Celery sticks and blue cheese dressing for dipping. This recipe produces a medium spicy wing, with the right amount of crunch, flavor...
CWEB Breaking News CWEB Business News CWEB Celebrity and Fashion News CWEB Health News CWEB Politics News CWEB Science and Technology News CWEB Sports News CWEB US News CWEB World News CWEB Cooking Recipes CWEB Movie and Music News CWEB Public Blog