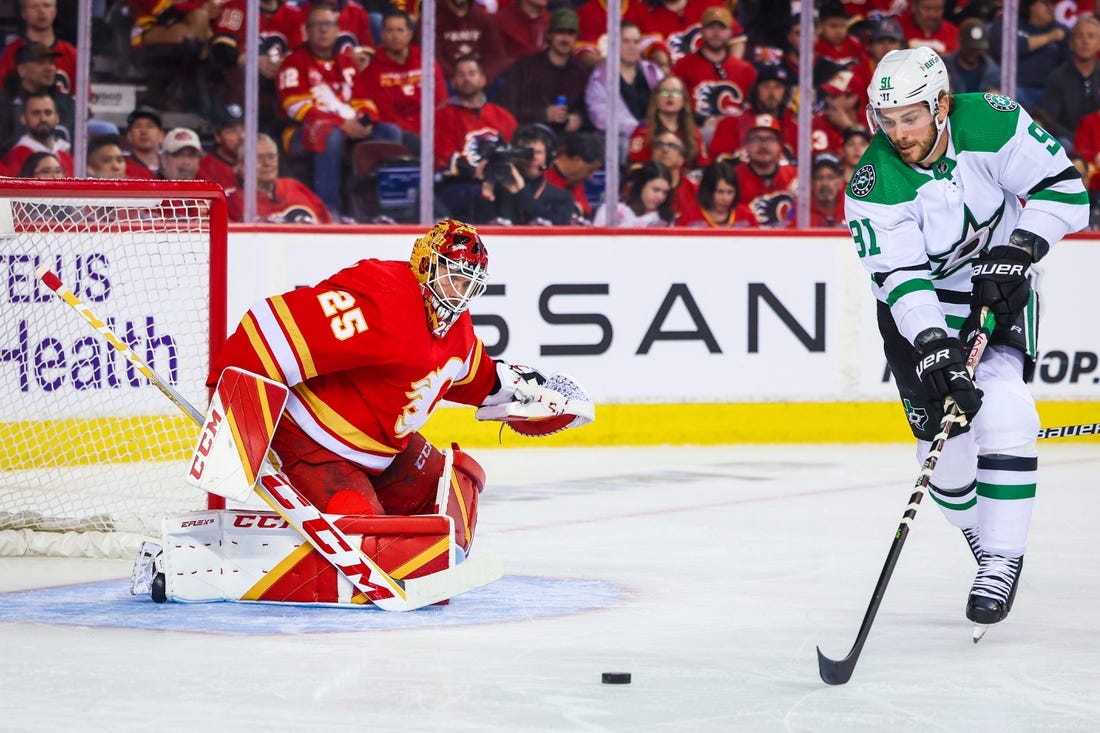 Andrew Mangiapane scored the winning goal and the host Calgary Flames netted three unanswered third-period tallies to claim a 3-1 victory over the Dallas Stars in Game 5 of their Western Conference first-round playoff series on Wednesday.

Mikael Backlund and Trevor Lewis also scored for the Flames, who hold a 3-2 lead in the best-of-seven series.

Both Mangiapane and Backlund also collected an assist. Calgary’s Jacob Markstrom made 20 saves to claim another goaltending battle.

Jason Robertson scored for the Stars, while goaltender Jake Oettinger made 29 saves in a strong outing.

The Flames, who will look to close out the series Friday in Dallas, came out on top despite trailing 1-0 after two periods.

After drawing even on Backlund’s tally, Mangiapane put the Flames ahead at 10:38. Upon taking a pass from Backlund, Mangiapane worked to the slot and unloaded a wrist shot off the crossbar and into the net.

From there, the Flames hung strong thanks to a couple of clutch Markstrom saves. The hosts even killed a late Dallas power play before Lewis notched an empty-net goal with 57.1 seconds remaining.

Calgary outshot the visitors 16-5 in the third period.

After a scoreless first period, Robertson finally cracked the goose eggs with 6:39 remaining in the second period. Taking advantage of a loose puck inside the Calgary blue line, Robertson sent a shot that Markstrom stopped, only to have it bounce off Flames defenseman Noah Hanifin and into the net.

It was Robertson’s first goal of the playoffs after a sparkling 41-goal regular season.

Backlund finally put the Flames on the board at 6:49 of the third period. Thanks to a rush led by Blake Coleman, Mangiapane sent a shot-pass from the right faceoff dot that Backlund redirected for his first goal of the series. The Flames had gone more than 120 minutes of game time since they last scored at home in the series.