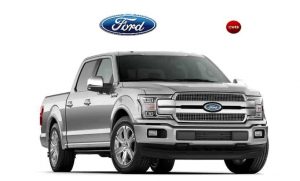 Ford Motor Company (NYSE: F)  will introduce the latest version of its bestselling F-150 pickup truck this week with features such as an onboard generator and a reclining seat.

Ford’s vice president of U.S. marketing, sales and service Mark LaNeve said the new F-150 pickup truck will have aa hybrid version with an onboard generator that can power a work site or a home “for a short period of time.” The seats also have the capability to lay flat.

The Ford F-150 pickup truck has been the best-selling vehicle in the US since 1981. 900,000 F-Series trucks were sold in America. Ronald Reagan was in his first term as president in 1981.

WILLIAM CLAY FORD JR.Executive Chairman, Ford Motor Company. As Executive Chairman of Ford Motor Company, William Clay Ford Jr. is leading the company that put the world on wheels into the 21st century.  Mr. Clay joined the Board of Directors in 1988 and has been its chairman since January 1999. Through the years, his vision for the company has remained unchanged. “During the last industry downturn, Ford invested heavily in fuel economy and technology at a time when many others were pulling back,” he says. “It absolutely was the right thing to do.”

The company announced that ambition today as it issued its 21st annual Sustainability Report. Ford is the only full line U.S. automaker committed to doing its part to reduce CO2 emissions in line with the Paris Climate Agreement and working with California for stronger vehicle greenhouse gas standards.

Carbon neutrality refers to achieving zero carbon emissions by balancing such emissions with carbon removal. To achieve its goal, Ford will focus initially on three areas that account for approximately 95 percent of its CO2 emissions – vehicle use, its supply base and the company’s facilities.

Ford said it is setting the 2050 goal fully aware of challenges, including customer acceptance, government regulations, economic conditions and the availability of renewable, carbon-neutral electricity and renewable fuels.

“We can develop and make great vehicles, sustain and grow a strong business and protect our planet at the same time – in fact, those ideals complement each other,” said Bob Holycross, vice president, chief sustainability, environment and safety officer. “We don’t have all the answers yet but are determined to work with all of our global and local partners and stakeholders to get there.”

The 2050 commitment represents Ford continuing to ratchet up more environmentally friendly performance for its products and operations. In 2019, the company expanded its climate strategy to find more effective ways to integrate the wants and needs of people and its business, along with the possibilities of technology, by applying human-centered, design-thinking. A cross-functional Ford team from around the world – including the U.S., Europe and China – developed the company’s carbon-neutral approach after analyzing information on the environment, customers, technology, legislation, energy, competitive approaches, life-cycle assessments and other trends.

CWEB Analysts see the stock as a potential for long and short term growth and a great addition to one’s portfolio. We believe upward movement of  $10 in 2021