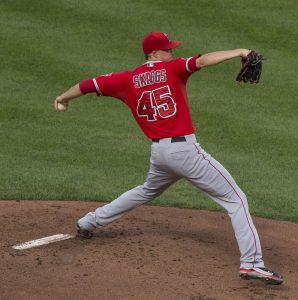 Los Angeles Angels former executive Eric Kay has been charged by federal authorities in Texas with distributing fentanyl which led to the overdoes death of Angels pitcher Tyler Skaggs. An affidavit of the criminal complaint filed against Kay in U.S. District Court in Fort Worth said the longtime member of the Angels’ media relations department and Skaggs had a “history of narcotic transactions” and that Kay would “distribute these pills to [Skaggs] and others in their place of employment and while they were working.”

Kay was arrested and made his first court appearance Friday at the Mahon Federal Courthouse in Fort Worth. They also unsealed the complaint against him that had been filed last week. “Tyler Skaggs’ death coming as it did in the midst of an ascendant baseball career, should be a wake-up call,” Erin Nealy Cox, the U.S. attorney for the Northern District of Texas, said during a news conference Friday. “It should prove to his many, many fans that no one is immune from the deadly addictive nature of these drugs, whether sold as a powder or hidden inside an innocuous-looking tablet. Nealy Cox said the federal investigation remains “open and active.”

Skaggs, 27, died in his Southlake, Texas, hotel room on July 1, 2019, hours before the Angels were to play the Texas Rangers. He was discovered on his bed, fully clothed, with no signs of trauma. A toxicology report by the Tarrant County medical examiner found the opioids fentanyl and oxycodone in his system. The medical examiner listed the cause of death as “alcohol, fentanyl and oxycodone intoxication with terminal aspiration of gastric contents,” meaning he choked on his vomit.

“It was later determined that but for the fentanyl in [Skaggs’] system, [he] would not have died,” the affidavit by Drug Enforcement Administration special agent Geoffrey Lindenberg said in a statement Friday on behalf of the Skaggs family, attorney Rusty Hardin said they were “deeply heartbroken to learn that Tyler would be alive today if not for a pill containing fentanyl” allegedly provided by Kay.

“We are relieved that no one else who was supplied drugs by this Angels executive met the same fate as Tyler,” the statement said. “While nothing will replace the loss of Tyler, we are very grateful to federal prosecutors for their diligent and ongoing work.” Inside Skaggs’ hotel room, authorities found white powder on the floor and a blue pill marked “M/30.” Both tested positive for fentanyl.

The affidavit said the blue pill had the appearance of a “legitimate prescription 30 milligram oxycodone tablet,” but that the presence of fentanyl “indicates that the pill was counterfeit.”

Investigators, including a Drug Enforcement Administration agent, learned that several unnamed individuals were aware that Kay provided pills — the oxycodone pills they referred to as “blues” and “blue boys” — to Skaggs, according to the affidavit.

Kay distributed the drugs, the affidavit alleged, “beginning in or before 2017.” He worked for the Angels for 24 years before departing in the wake of Skaggs’ death.

“We learned that there was unacceptable behavior inconsistent with our code of conduct, and we took steps to address it,” the Angels said in a statement. “Our investigation also confirmed that no one in management was aware, or informed, of any employee providing opioids to any player, nor that Tyler was using opioids.

In an interview with The Los Angeles Times in June, Skaggs’ widow said she was stunned that drugs were involved in her husband’s death. “He didn’t exhibit any behaviors of someone who was abusing or addicted to drugs,” Carli Skaggs said.

Kay said in a statement issued through his attorney in October that he was cooperating with the federal investigation into Skaggs’ death because it was “the right thing to do” and “it’s time for everybody to stand up and take responsibility for their respective roles.”

The attorney, Michael Molfetta of Newport Beach, previously described Skaggs as “an addict who overdosed and I just know that attempts to blame any one person for another person’s addiction are extremely naive,” Molfetta said last year. “I think any attempts to blame Eric Kay for what happened are shortsighted and misguided. When all the facts come out, I think that what happened is a tragedy. What happened is incredibly sad on many levels. But to say it’s any one person’s fault is not right.”

At least six Angels players, including current pitchers Andrew Heaney and Noé Ramirez and former pitchers Matt Harvey and Trevor Cahill, were questioned by federal agents last fall as part of the investigation.

The agents hoped the players would shed light on whether the use of opiates was prevalent among their teammates. Agents also asked players if they ever saw others using illegal narcotics on team flights and if they knew how Skaggs acquired the drugs.

In response to Skaggs’ death, MLB and the players union agreed to a new drug-testing policy beginning with the 2020 season. The policy calls for treatment, not suspension, of players who test positive for opioids or other drugs of abuse. It also declassifies marijuana as a drug of abuse.

Under the new policy, players are tested regularly for opioids, fentanyl, cocaine, and synthetic tetrahydrocannabinol (THC). Major leaguers previously were tested for opioids or marijuana only when team or league officials had reasonable cause.