Image Of A Massive Bat From Philippines Could Invade The World 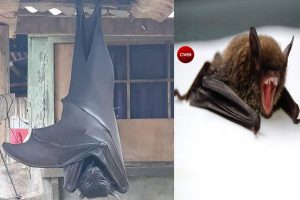 Science currently indicates that the SARS-CoV-2 virus that causes COVID-19 potentially originated in one of the animal species sold in Chinese market. On March 17, researchers from the United States, United Kingdom and Australia published an article in Nature Medicine showing that SARS-CoV-2 was very similar to viruses present in bats and pangolins.

Scientists are still investigating the origins of how the virus responsible for the COVID-19 pandemic got into the human population.

“Bats have evolved some amazing mechanisms. They have a super robust anti-viral response but they have a very strict regulation of the inflammatory response, they have the best of both worlds,” says Arinjay Banerjee of McMaster University in Canada.

Public health experts do not know how SARS-CoV-2 transferred from animals to humans, but now that the virus is spreading directly between people, it has caused a global pandemic. Horseshoe bats in China have coronaviruses that are  genetically similar to SARS-CoV-2 but, to date, it has not been found in bats or other wild animals. It’s true origin remains a mystery. Based on current knowledge, this virus likely passed through another animals and mutated before it jumped to humans. Experts think this likely occurred in a wildlife market, or wet market, in China where lots of different wildlife and humans are in close contact, making it easier for animals and humans to share viruses. 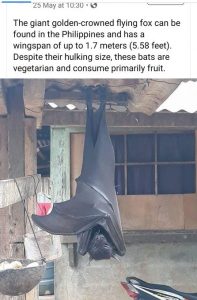 A Twitter user Alex (@AlexJoestar622), posted two pictures on his feed. They are apparently called Golden-crowned flying foxes and are massive bats with fox-like faces and a wingspan that can extend up to about 5 1/2 feet.

Could the world be invaded with giant bats.  More to follow ……..