Inside the sacred danger of Thailand’s caves

Home » Inside the sacred danger of Thailand’s caves 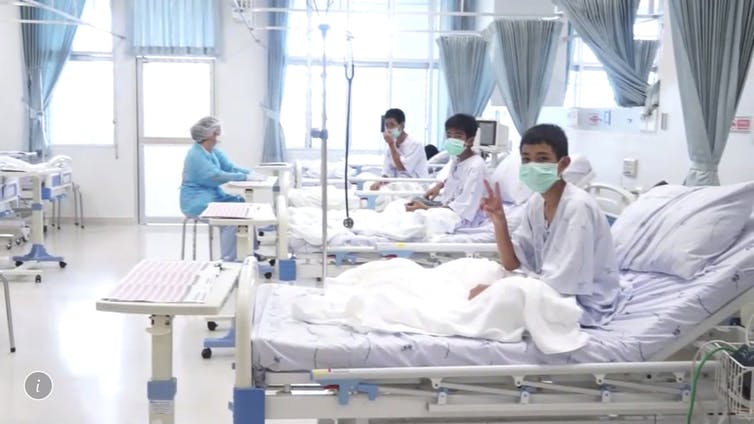 Inside the sacred danger of Thailand’s caves – CWEB.com

After almost three weeks in the dark, 12 Thai boys and their coach, were rescued from a cave deep underneath the mountains that form the Thai-Burmese border. The boys, aged 11 to 16, were part of a soccer team that also dabbled in outdoor adventures with the charming nickname the “wild pigs” (“mu pa”). The snacks they are reported to have carried into the cave, to celebrate the birthday of one of their friends, likely sustained them during the ordeal.

The name of the cave, Tham Luang Nang Non, literally means “the cave of the reclining lady.” It is named after a princess who, as the legend goes, committed suicide after she was forbidden to be with her commoner love. Her body became the mountains, and her genitals, the cave. She is now the ruler – the “jao mae” – of both.

I first visited Nang Non Cave in the rainy season of 2007 along with my partner, for my book project “Ghosts of the New City.” While the current attention has focused on the treacherous flooded passages, the trapped children and their heroic rescuers, as I found, there is much more to this story.

The cave is enthralling. Its entrance is broad, like a cathedral door, and during the rainy season the humidity pours out of it like steam. It looks like the gateway to another world. In some senses, it is.

I started down the rocky descent toward the entrance, drawn in by its vast scale and emptiness. Only my companion, having heeded better the sign at the entrance forbidding ingress during the rainy season, called me back. I returned reluctantly.

I was right to retreat. As the schoolchildren found out, during the rainy season the water levels at tight spots in the cave can rise dramatically, trapping would-be explorers inside. So in the faces of the trapped children, I can see a little of me, had I kept going.

But I spent a great deal of time in other caves around the region, interviewing religious attendants and local guides about how people in the region understand the power of caves and other sacred sites, and what their role is in Northern Thai mythology.

Just south of Nang Non Cave and about an hour north of the city of Chiang Mai, the capital of Thailand’s northern region, is Chiang Dao peak. It is an impressive mountain, rising straight up from rice fields, with sheer drops on most sides. And, like many such mountains in the region, there is a cave that winds down into its heart.

Local chronicle and oral legend varies on the exact story of the place: Some say the cave was the home of demonic giants – “yaksha” – who were nonetheless ruled from within the cave by a noble king. Others have a noble ruler founding the kingdom of Lanna (Northern Thailand) and then retreating to the cave only to have his realm fall into disarray.

My favorite such story has a Northern Thai lord – Jao Luang Kham Daeng, the Lord of Burnished Copper – who was tricked into following a beautiful woman into the cave, where he was later devoured by the spirits within. However, in his death, according to one version, he became its ruler.

In each of these stories, the cave becomes the home of a powerful but sometimes dangerous spirit, who keeps the Northern Thai region safe, prosperous and healthy so long as the spirit and the dangerous power of the mountain is respected.

It could be inferred that Northern Thai caves, then, have little to do with Buddhism. But religion in Thailand and especially the North is, as scholars such as Pattana Kitiarsa, Erick White, Justin McDaniel and many others have pointed out, a blend of different influences: a belief in the power of particular people and places, a respect for Buddhist teachings, and a model of kingly power based on older Hindu traditions in the region.

The caves of Northern Thailand are places where these religious traditions blend: There are shrines to the Buddha, Hindu hermits and the spirit lords of the mountain, all in the same space.

These, as some might expect, are not three separate traditions. They blend together, especially so in cave legends. For instance, the caves in Sri Lanna National Park, in between Chiang Dao and Nang Non caves, are rumored to be the home of two princesses that hid after their kingdom was destroyed.

They sought protection in a cave, and the Buddha, hearing their pleas, appointed a monstrous ghost to keep them safe – a ghost that persists, according to legend, today. Thus, kingship, Buddhism, and spirits all combine in one story.

Places of danger and possibility

Caves are liminal spaces – an in-between space. They are openings to another world, one that is shrouded in darkness, difficult to access, and, as the story of the 12 boys shows, is often hostile to humans.

And in them are spirits. In Thailand, these nature spirits are often women, and, as counterparts to the figures of Buddhist monks, offer their followers something that Buddhism cannot provide: assistance with love, money, and other things of this world with which monks do not concern themselves. At the same time, they pose a potential danger if slighted.

As such, Thailand’s sacred caves are places full of power, but also full of danger. Such places, as I describe in my book, often have yearly rituals in order to ensure that the spirits provide for the village in the future.

In many, the spirits acquire a bit of a ferocious aspect. After all, they are the rulers of an inhospitable natural world that must be tamed before it can be of use to humans.

This acknowledgment of nature’s danger is a drama that is played out in rituals across the region, a number of which I attended as a part of my research. In Chiang Mai, for instance, each year the local people hold a tradition wherein two mountain spirits possess two human mediums, who in turn devour a raw buffalo and drink its blood, before surrendering to the Buddha and agreeing to help the city with cool breezes and clean water.

The story of the 12 trapped boys, then, is one that can be read at multiple levels. For some, it is a story of the heroism of rescue workers against an inhospitable environment. For others, it is a story that emphasizes the Buddhist piety of the team’s coach and the power of Buddhist prayers over the spirits of the mountain.

In my view, such ideas of danger and power were always a part of the liminal spaces of mountain caves. The stories of the spirit lords under the earth reflect both human fascination and human fears.

This article, originally published on July 10, was updated to incorporate the latest developments of the rescue.