Miami, We Have a Problem-Marlins’ Positive COVID-19 Outbreak Climbs to 17

Home » Miami, We Have a Problem-Marlins’ Positive COVID-19 Outbreak Climbs to 17 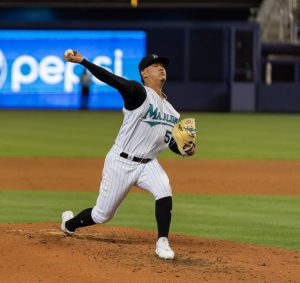 It’s been less than one week since the MLB season got underway, and we’re already seeing a wave of positive COVID-19 cases sweep through the Miami Marlins’ clubhouse. Yesterday, it was reported by MLB & the Marlins front-office that 7 more players & 2 coaches had tested positive.

Over the weekend there was a report that 4 players had tested positive for COVID-19 as well, but the team decided to continue to play after a team vote. A team vote doesn’t necessarily mean they can elect to forgo playing because MLB & Commissioner Rob Manfred have the final say in the matter. Today we learned that 4 more players tested positive bringing the total to 15 infected players.

According to HIPPA laws, neither MLB nor the baseball franchises need to report which players test positive unless the players themselves agree to provide details. Regardless, it’s been pretty obvious to speculate which players tested positive because when a team decides to make corresponding roster changes and place players on their Injured List, they need to specify the reason — for example: nature of injury, paternity leave, personal reasons. However, players who have chosen not to go public, are still placed on the MLB 10-day injured list, without a reason, which leads to speculation and the assumption the matter is due to the coronavirus.

What we know now is 15 Marlins players & 2 coaches tested positive for COVID-19 based on daily testing conducted by Major League Baseball and the Commissioner’s Office. The players we know about are (1B)Garrett Cooper, (SS)Miguel Rojas, (OF)Harold Ramirez and

(SP)Jose Urena. The names of the 13 other players have yet to be released. It’s also not clear if (C)Jorge Alfaro, who was placed on the 10-day injured list on Friday, is the 18th member of the Marlins to test positive.

Major League Baseball has decided to temporarily pause the season of the Miami Marlins as the team deals with a Coronavirus outbreak that has now impacted 17 or 18 of the club’s players and coaches, Today, MLB officially announced that they are postponing Marlins games through Sunday as the players continue to quarantine in their hotel in Philadelphia. It doesn’t make sense to rush them back on the field, as it’s unsafe and unfair to expect them to field a major league-caliber team under these conditions. It sounds like MLB does intend to make up those lost games, though it’s possible playoff spots will be determined by winning percentage in the end.

However, the way things are going right now, there might not even be playoffs and a post season but as of now, MLB has no plans to cancel the season or any games other than yesterday & today’s contests between the New York Yankees vs the Phillies in Philadelphia. “I don’t see it as a nightmare,” Commissioner Manfred told MLB Network on Monday night. “We built the protocols to allow us to continue to play. That’s why we have the  expanded rosters, that’s why we have the additional players. And, we think we can keep people safe and continue to play.” Oh really, Mr. Manfred? You’re trying to “keep people safe” or are you more concerned about DOLLARS than the sense of health & safety of the athletes, their team’s personnel, hotel staffs, transportation services, and anyone coming into contact with the game of baseball? I know this is not Korea, but when they started their professional baseball season last month they had a strict rule that if one single player tested posted for the Coronavirus  they would shut down the entire league for 14-days; which they did, and when they resumed play, there were no more cases because they stopped the spread. You know why MLB won’t do that? It’ll cost them too much money, I suppose.

I love baseball and I hope I am wrong, but I did not have a good feeling about how MLB moved forward how they did. They spent all those weeks haggling with the players union over salaries, yet they never addressed the major important safety protocols containing a bubble. There is “no bubble” and too many states & cities are involved & exposed. Did MLB think COVID-19 wouldn’t infect & impact their players? If I were the Commissioner of MLB, I would’ve had 2 or maybe even 3 bubbles in selected regions & areas  similar to what the NBA & NHL is trying to do by keeping everyone within the same place. The NBA is in Orlando Florida and the NHL is in Toronto Canada. The MLB? They are everywhere across the entire United States, which could be a bunch of BIG BUBBLES waiting to BURST!