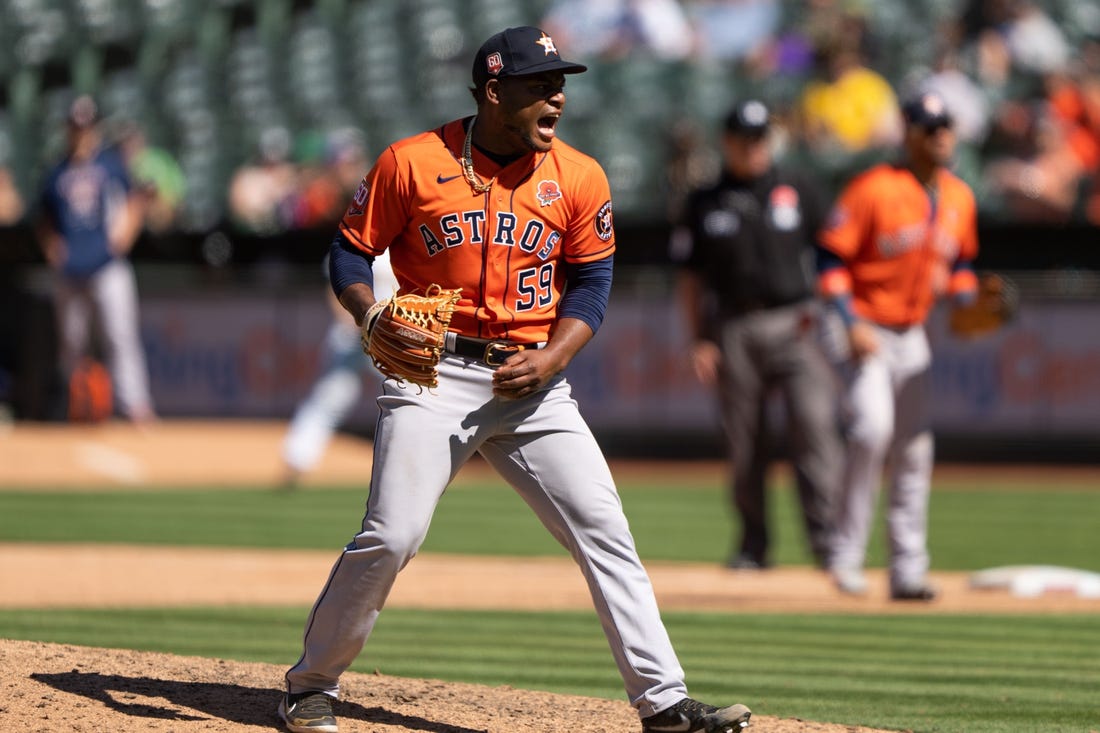 Yordan Alvarez hit two solo home runs, Jose Altuve added a two-run blast and Framber Valdez allowed a run and two hits in a complete game as the visiting Houston Astros rolled to a 5-1 win over the Oakland Athletics on Monday.

Valdez (5-2) struck out seven and walked three, throwing a career-high 114 pitches in the Astros’ first complete game since Zack Greinke produced one on June 4, 2021.

Alvarez put the Astros on top in the fourth inning via a titanic solo home run to the second deck in right-center field off Oakland starter Paul Blackburn. Alvarez’s second homer, his 14th of the season, came in the eighth off Oakland reliever A.J. Puk.

Blackburn (5-1) allowed four runs on five hits with five strikeouts and no walks in 6 2/3 innings.

Feltner (1-1) gave up one run on four hits and one walk while striking out six for his first major league win in his fifth career outing. Pinch hitter Yonathan Daza hit a tiebreaking three-run double in the seventh inning for the Rockies.

After Chicago’s Daniel Norris (0-3) induced a double-play ball to Andrew McCutchen, Mike Brosseau singled and Kolten Wong walked. Urias, on a full count, just cleared the left field fence to break a 4-4 tie. Tyrone Taylor tied the game with a two-run homer in the sixth, and Jace Peterson also went deep for the Brewers, who lead the NL in home runs.

P.J. Higgins and Rafael Ortega hit back-to-back homers in the fourth and Nico Hoerner had three hits with three RBIs for the Cubs, who stranded four combined runners in the eighth and ninth innings to lose for the fourth time in five games.

Aaron Ashby allowed one run and struck out a career-high 12 in six-plus innings while Victor Caratini and Tyrone Taylor homered as visiting Milwaukee completed a doubleheader sweep of Chicago.

Rowdy Tellez had the Brewers’ only other hit, an RBI double. Josh Hader tossed a perfect ninth for his 18th save of the season and second of the day.

Goldschmidt extended his on-base streak to 35 games and his hitting streak to 21 games. He has 22 extra-base hits and 32 RBIs in May. Gorman went 3-for-3 with a walk and two runs.

Spencer Torkelson had three hits and an RBI, and Willi Castro drove in two runs as host Detroit beat Minnesota.

Andres Gimenez broke a tie with a three-run home run in the eighth inning as host Cleveland defeated Kansas City.

Jose Ramirez was 2-for-4 with a home run and three RBIs, and Nick Sandlin (4-2) got the Guardians out of a bases-loaded, two-out jam in the top of the eighth to earn the win.

Royals starter Jonathan Heasley worked a career-high six innings. He gave up three runs on six hits and three walks with three strikeouts. Collin Snider (3-2) served up Gimenez’s homer in the bottom of the eighth.

Curt Casali hit a go-ahead two-run home run off Andrew Bellatti with one out in the top of the 10th inning to lift San Francisco past host Philadelphia.

Evan Longoria also homered and Wilmer Flores added a home run and two RBIs for the Giants. San Francisco starter Logan Webb tossed eight-plus strong innings and gave up four hits and three runs to go along with 10 strikeouts and no walks. Dominic Leone (3-0) earned the win in relief. Camilo Doval allowed an unearned run in the 10th for his eighth save.

Nick Castellanos, Rhys Hoskins and Kyle Schwarber homered for the Phillies, who lost their fourth in a row.

Eli White scaled the wall to rob Ji-Man Choi of a three-run home run in the first inning, then connected on a two-run homer in the second to lead Texas past Tampa Bay in Arlington, Texas.

Tampa Bay’s Wander Franco had three hits, but in the ninth inning was lifted for a pinch runner after pulling up rounding first on a single. Rays starter Drew Rasmussen (5-2) yielded a season-high five runs in three innings.

Tucupita Marcano hit his first career home run and Bryan Reynolds also went deep as Pittsburgh blew an early lead before rallying in the ninth inning for a victory at Los Angeles.

David Bednar (2-1) blew a save attempt for the first time in 10 chances, but he picked up the victory after giving up two runs in the eighth inning as the Dodgers took a 5-4 lead. Bednar pitched a scoreless ninth.

Seven Baltimore players recorded the team’s 14 hits and five crossed home plate on the way to a dominating win at Boston.

Ryan Mountcastle went 4-for-5 with four runs, a first-inning home run and a double for the Orioles. Ramon Urias (three RBIs) and Anthony Santander (four RBIs) also left the yard, and Trey Mancini finished 3-for-4.

Zac Gallen remained undefeated and Pavin Smith hit a three-run homer to help Arizona earn a win over Atlanta in the opener of a three-game series in Phoenix.

Gallen (4-0) bounced back from his worst outing of the season to pitch 5 2/3 innings and gave up two runs on seven hits. He walked two and struck out six. Gallen has allowed two or fewer runs in eight of nine starts this year.

Atlanta’s Spencer Strider (1-2) made his first major league start and took the loss. He pitched 4 1/3 innings and allowed five runs on four hits and two walks with seven strikeouts.

Starling Marte and rookie Nick Plummer each had three hits, a homer and four RBIs as host New York pounded out 16 hits and routed Washington.

Francisco Lindor had three hits and two RBIs for the Mets, who won their fourth consecutive game by erasing an early 3-0 deficit. New York’s Pete Alonso added a solo shot.

Washington starter Erick Fedde (3-4) was tagged for eight hits and six runs in 1 1/3 innings. Josh Bell and Cesar Hernandez each had three hits for the Nationals, who had won four of their previous five games.