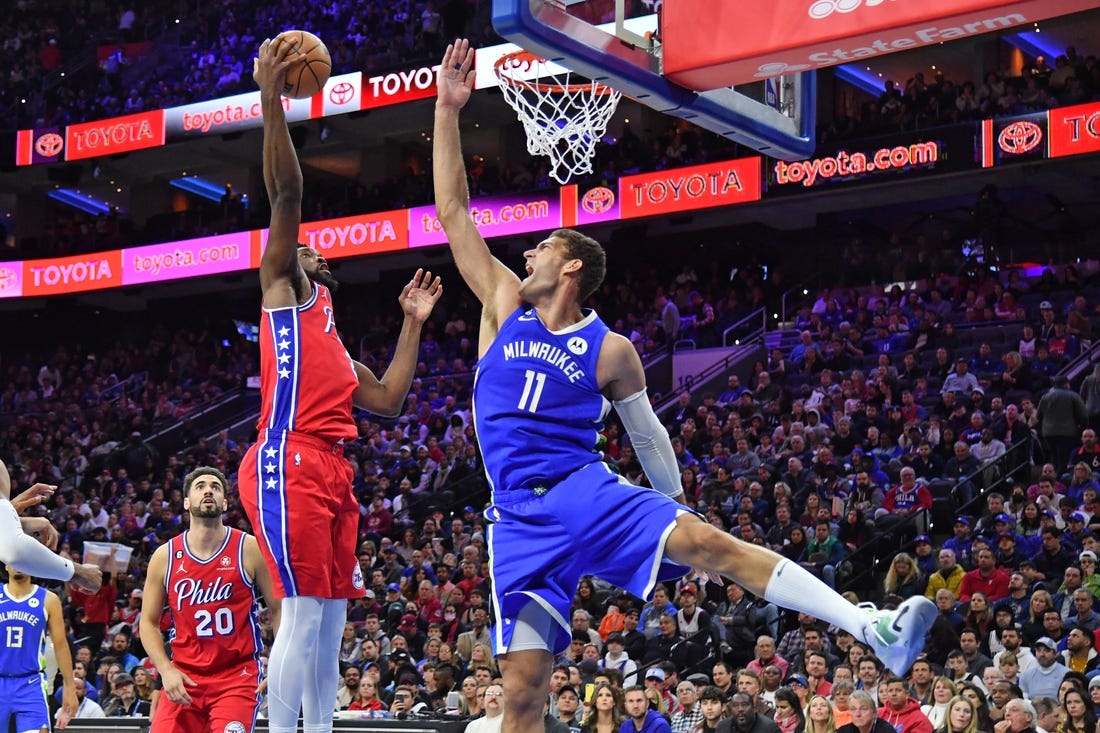 Joel Embiid had 32 points, 11 rebounds, eight assists and three blocked shots to lift the host Philadelphia 76ers past the Milwaukee Bucks 110-102 on Friday.

Philadelphia’s Tyrese Maxey added 24 points but didn’t return after halftime because of a sprained left foot. Georges Niang scored 17 for the 76ers, who earned a third consecutive victory.

The Sixers continued to compete without James Harden (strained tendon in foot). Tobias Harris was also a late scratch due to left hip soreness.

Giannis Antetokounmpo led the Bucks with 25 points and 14 rebounds but shot just 4 of 15 from the free-throw line. Bobby Portis added 21 points and 11 rebounds.

The Cavaliers blew a 10-point lead in the final minute of regulation, then needed Garland’s 3-pointer for the final points of the first overtime to extend the game. Evan Mobley posted 21 points and 18 rebounds, while Jarrett Allen added 20 points and 12 boards for Cleveland.

Kelly Oubre Jr. tallied 34 points and P.J. Washington and Terry Rozier both scored 28, but the Hornets lost for the 10th time in 11 games.

Brown had 27 points and 10 rebounds, Tatum had 19 points and 10 assists and Derrick White scored 26 points for the Celtics, who have lost in regulation only once in 16 games this season.

Luka Doncic had 33 points, 12 rebounds and 11 assists in his return to the lineup, Christian Wood had 28 points and host Dallas beat short-handed Denver.

Doncic, who sat out Wednesday’s home loss to Houston for rest, notched his NBA-best fourth triple-double of the season.

Kentavious Caldwell-Pope and Bruce Brown scored 18 points each and Bones Hyland had 17 points for Denver, which played without starters Nikola Jokic and Jamal Murray (health and safety protocol) and Aaron Gordon (non-COVID illness).

Jaren Jackson Jr. scored 25 points and matched his career high with 12 rebounds for Memphis, which never trailed in a win over visiting Oklahoma City.

Grizzlies star Ja Morant had 19 points on 5-for-20 shooting and added 11 assists before hobbling to the locker room due to a left ankle injury with 3:09 remaining. John Konchar made five 3-pointers and finished with a career-high 19 points and 10 rebounds as Memphis ended a two-game skid.

Josh Giddey had 20 points and 11 assists for the Thunder, while Shai Gilgeous-Alexander scored a season-low 15. Oklahoma City had won three of its previous four games.

Kyle Kuzma scored 21 points — including the game-winning free throw not even midway through the overtime period. That held up, however, as Max Strus was unable to make an open look from well beyond the arc as time expired. Miami’s Kyle Lowry recorded his 21st career triple-double after collecting 24 points, 15 assists and 10 rebounds.

Washington’s Kristaps Porzingis collected 20 points and 17 rebounds. Corey Kispert highlighted his 17-point performance by sinking five 3-pointers for the Wizards, who have won five of their past six games.

Lauri Markkanen scored a career-high 38 points and sank a late clutch jumper to help Utah snap a three-game losing streak with a victory over Phoenix in Salt Lake City.

Phoenix’s Devin Booker went off for 49 points and 10 assists and made a buzzer-beating shot, but his last-second basket was only for two points after he grabbed an offensive rebound from a missed 3-point attempt by Damion Lee.

Malik Beasley helped carry part of the offensive load for the Jazz, draining seven 3-pointers en route to scoring 27 points, while Jordan Clarkson chipped in with 20 points. DeAndre Ayton logged 17 points and 10 rebounds for the Suns, who shot 52.1 percent.

Jalen Suggs’ 3-pointer with five seconds remaining lifted Orlando past host Chicago after the Magic nearly squandered a 19-point lead in the second half.

Coming into Chicago on a two-game skid, the Magic led almost wire-to-wire save a 16-14 Bulls lead in the first quarter and another Chicago edge in the final 40 seconds. Chicago’s DeMar DeRozan scored 11 of his game-high 41 points in the fourth quarter. Nikola Vucevic finished with 14 points, 16 rebounds and seven assists.

Wendell Carter Jr. scored 21 points to lead the Magic, followed closely by Suggs and Franz Wagner with 20 each. Bol Bol finished with 15 points and 10 rebounds.

Curry completed a double-double with a game-high 10 assists and Draymond Green contributed 10 points, nine rebounds and seven assists as the Warriors improved to 7-1 on their home floor. Golden State is 0-8 on the road.

Julius Randle put up 20 points and RJ Barrett added 18 for the Knicks, who had opened a five-game Western swing with wins over the Utah Jazz and the Denver Nuggets.

Eric Gordon led the Rockets with 24 points but scored only five in the second half. Jalen Green added 16 points but missed 8 of 10 field-goal attempts.

Austin Reaves scored 16 points and Wenyen Gabriel added 15 for the Lakers, who have won two games in a row. Los Angeles star LeBron James, who had been considered questionable due to a groin injury, sat out his third consecutive game.