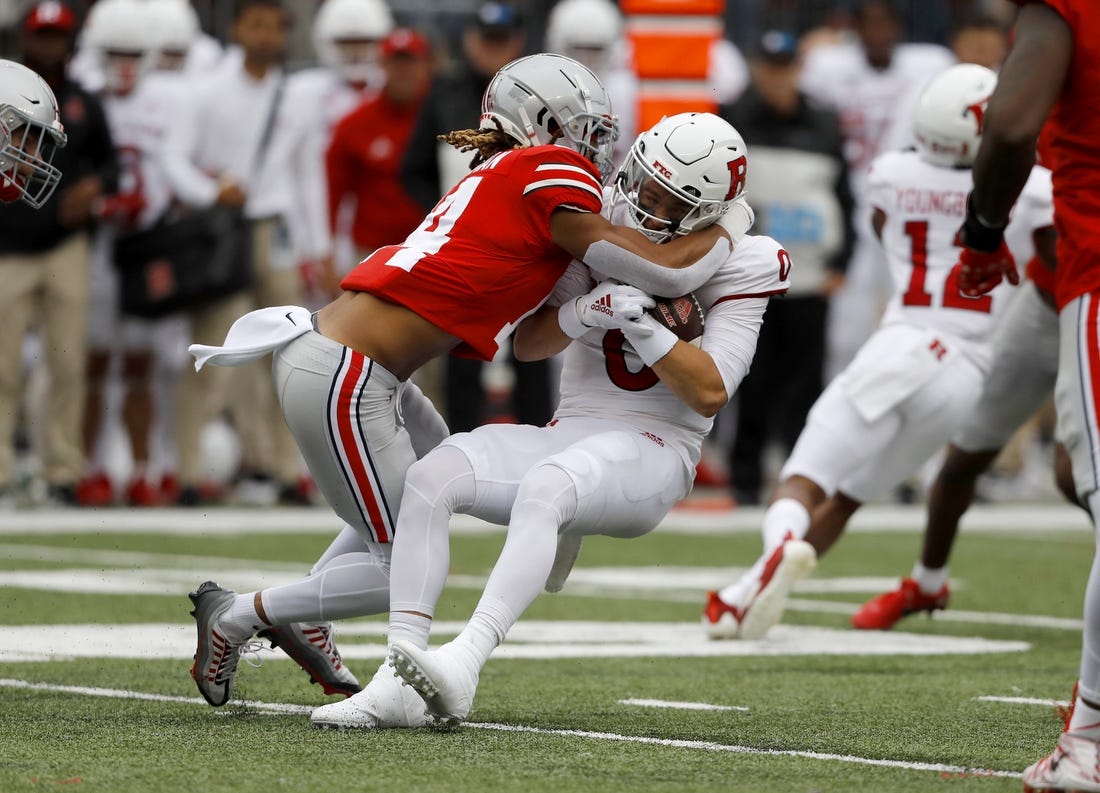 Miyan Williams tied an Ohio State record with five rushing touchdowns as the No. 3 Buckeyes overcame an early deficit to roll past visiting Rutgers 49-10 in Columbus, Ohio, on Saturday.

With injured starting running back TreVeyon Henderson unavailable, Williams took over. He scored twice from the 1-yard line and another from the 2 to give the Buckeyes (5-0, 2-0 Big Ten) a 28-7 halftime lead.

Williams, who had a career-high 189 yards on 21 carries, added a 70-yard TD in the third quarter and tied the mark from the 2 early in the fourth quarter. He joined Pete Johnson (1974 vs. North Carolina) and Keith Byars (1984 vs. Illinois).

Rutgers (3-2, 0-2) went ahead 7-0 in the first quarter on a 14-yard pass from Evan Simon to Sean Ryan after Emeka Egbuka muffed a punt, giving the Scarlet Knights the ball at the Ohio State 18.

It was the first time in the nine meetings that Rutgers held a lead. The Buckeyes have won every game.

Ohio State quarterback C.J. Stroud was 13 for 22 for 154 yards with two TDs and an interception. His 36-yard TD to Julian Fleming made it 21-7 in the second quarter but the offense was lethargic at times.

On the Buckeyes’ next possession, a defensive pass interference put the ball on the Scarlet Knights’ 4 but Ohio State needed seven plays and a defensive holding to punch it in on Williams’ 1-yarder. The 39-yard drive took 10 plays and ran 4:48 off the clock.

After a Stroud interception by Avery Young on the first play of the third quarter led to a field goal, Williams on the Buckeyes’ next snap went 70 yards to make it 35-10.

The game turned heated midway through the fourth quarter when Ohio State punter Jesse Mirco ran for 22 yards and was belted out of bounds by Aron Cruickshank, who was ejected. Rutgers coach Greg Schiano raced across the field to confront Ohio State coach Ryan Day. They jawed face-to-face before being separated but they hugged and shook hands after the game.