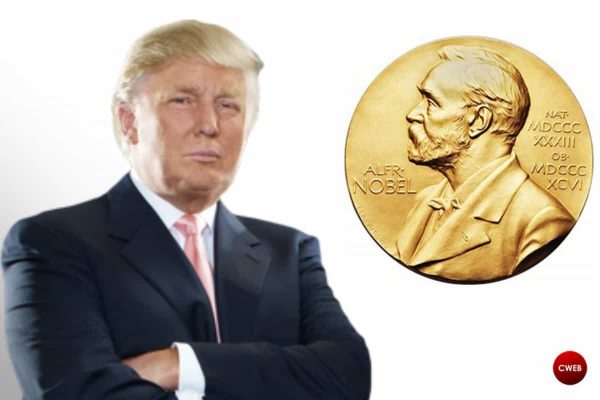 US President Donald Trump has been nominated for the 2021 Nobel Peace Prize over the deal his administration brokered between Israel and the United Arab Emirates.

Tybring-Gjedde, a four-term member of Parliament who also serves as chairman of the Norwegian delegation to the NATO Parliamentary Assembly, told Fox News: “For his merit, I think he has done more trying to create peace between nations than most other Peace Prize nominees. “I’m not a big Trump supporter.”The committee should look at the facts and judge him on the facts – not on the way he behaves sometimes. “The people who have received the Peace Prize in recent years have done much less than Donald Trump.

Police Officer Recalls Capitol Riots Horrors Being Crushed in Doorway by Rioters Warning: Disturbing Video
ShareTweetSharePin2    Last Wednesday, Officer Michael Fanone was on desk duty. With the riots happening in the Capitol, he...
Mexico Exonerates Ex Defense Minister on Drug Charges
ShareTweetSharePin2    An ex-defense minister, General Salvador Cienfuegos, has been exonerated in a drug case. U.S....
Google Store Uses Prominent Banner Message to Commemorate Fitbit Acquisition
ShareTweetSharePin2   Google has acquired Fitbit (Update: DOJ is still investigating) The Google Store is the place to go to...
Xiaomi Is the latest to be added to the U.S.’s list of alleged Chinese military companies.
ShareTweetSharePin2    Xiaomi is the latest Chinese company to be added to the U.S. military list by the Trump...
It’s official: Anne Hathaway hates her name
ShareTweetSharePin2    William Shakespeare said, “What’s in a name? That which we call a rose by any other name would...
Spatial Audio feature in AirPods could get additional support from Netflix
ShareTweetSharePin2    A report from a French site iPhoneSoft has indicated that Netflix has been working on giving...
Ivanka Trump Jared Kushner spend  over $100,000 for separate toilets for Secret Service Staff
ShareTweetSharePin2    On Thursday, the Washington Post reported that Jared Kushner and Ivanka Trump spent over...
JP Morgan Says Biden’s stimulus plan could drive funds back to the U.S. and away from Asia
ShareTweetSharePin2    U.S. President-elect Joe Biden’s stimulus plan amounting to a whopping $1.9 trillion for...
Biden’s proposed Covid relief package to have $1400 stimulus checks and additional funds for vaccinations
ShareTweetSharePin2    In a prime time address on Thursday, President-elect Joe Biden announced a $1.9 trillion relief...
Your tongue can tell if you have coronavirus or symptoms to look out for
ShareTweetSharePin2      One in five people with Covid still present with less common symptoms that dont get on...
South Korea’s highest court upholds former female President’s 20-year Prison sentence
ShareTweetSharePin2       The Supreme Court of South Korea has upheld the 20-year prison term of former President...
A sneak peek at accessories that can be synced with Apple devices at CES 2021
ShareTweetSharePin2    CES 2021 lacks the pomp and show of earlier avatars but there are some companies who are...
Midwestern Pet Foods Voluntarily Expand Recall As 70 Dogs Die
ShareTweetSharePin2    Midwestern Pet Foods Inc. has expanded its voluntary recall of pet foods after 70 dogs have died...
Federal Regulators Ask Tesla to Recall Certain Car Models Which Would Amount to A 158,000 Recall
ShareTweetSharePin2    The National Highway Traffic Safety Administration has asked electric-car maker Tesla to recall...
President Trump permanently banned from Snapchat
ShareTweetSharePin2   President Donald Trump’s Snapchat account has been permanently banned by social media app Snapchat.  On...
2 Virginia police officers were arrested after taking a selfie inside the Capitol during the violent deadly insurrection
ShareTweetSharePin2      During national news coverage of the aforementioned events, video footage which appeared...
Social Media Scandal causes recast of Armie Hammer’s role in ‘Shotgun Wedding’
ShareTweetSharePin2      Armie Hammer, actor, has stepped down from his role in the romantic adventure film,...
Trump impeached by House for role in violent and destructive Capitol riots in first time Historical event
ShareTweetSharePin2     The House has voted to impeach President Donald Trump for inciting protesters to insurrection...
Apple will give $100 Million for racial equity and justice initiative projects to challenge systemic racism
ShareTweetSharePin2  Commitments build on Apple’s $100 million pledge and include a first-of-its-kind education hub for...
Violent “Ndrangheta clan” to stand on trial in Italy: Biggest mafia trial in decades
ShareTweetSharePin2   On Wednesday a huge trial against the “Ndrangheta clan” in Calabria began amid tight security. A...
Five Pointers to Know If You’re Ready for The Future of Work
ShareTweetSharePin2    Change is inevitable and always has been, hasn’t it? However, the 21st century has seen the...