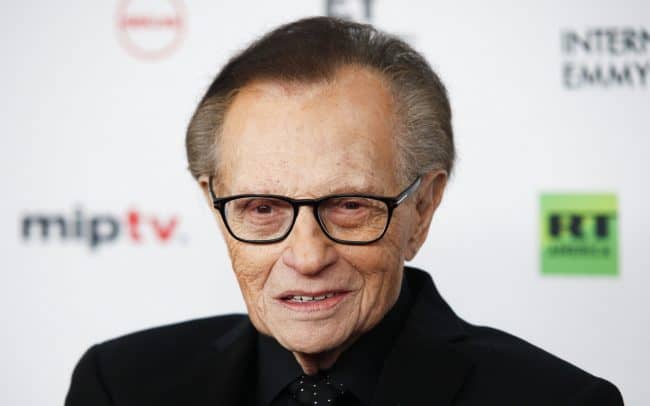 Veteran radio and TV host Larry King, who hosted the popular show Larry King Live on CNN for decades, died this morning. He was 87.

King’s official Twitter handle had an announcement about his death on Saturday but didn’t mention the cause. Several weeks ago King had been admitted to Cedars Sinai Medical Center in Los Angeles with Covid-19 symptoms.

Ora Media made the announcement about his death calling him their “co-founder, host and friend.” He had co-founded Ora media, after he left the Larry King Live show on CNN.

Larry King has been battling several health ailments from decades. He has survived heart operations, cancer and was also diagnosed with diabetes. However, he battled through illnesses never losing focus from his role as host and broadcaster.

He was a born survivor and never allowed ill health or tragedy to stop him. He continued to release episodes of Larry King Now on You Tube. It is just two weeks ago that his most recent episode saw a  YouTube release.

He was always looking to work in his career that spanned over six decades and had announced plans to host podcasts in May, during the pandemic, as he saw the growth of this type of media.

Brooklyn born King began his career as a newspaper journalist in the late fifties. He moved on to become a DJ in Miami, Florida and the transition to TV host was his next step up the ladder of fame.

In 1978 he began hosting a nationwide show called Larry King Show, which he continued with, even after getting the immensely popular Larry King Live television show on CNN in the mid eighties. This show aired every night from June 1985 to December 2010.

His guest included politicians, celebrities, sportspersons and others. He believed that precise questions  got him the best answers. His interviewing style was direct and he usually asked small and simple questions. He always said that the true stars of his programs were those whom he interviewed though his name appeared in the shows’ titles.

He won two Peabody awards for his work in broadcasting. He was inducted into the National Radio Hall of Fame and the Broadcasters Hall of Fame. He also played himself in roles in movies and TV shows.

He was married eight times. A few months ago he lost two of his adult children: daughter Chaia and son Andy.