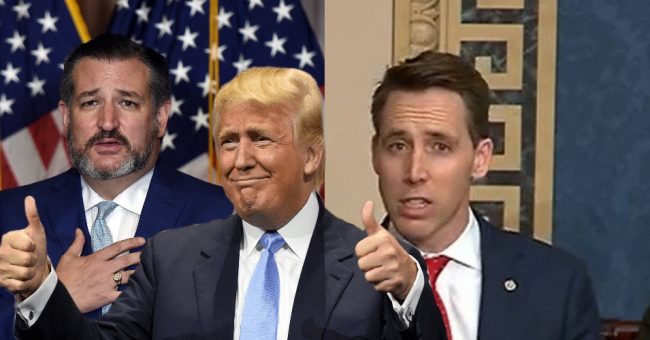 An ethics complaint, filed by a group of Democrats, against Republican Sens. Josh Hawley and Ted Cruz has been laid before the Senate on Thursday. It asks for an investigation to find out whether these senators had played a coordinating role with the organizers of the pro-Trump rally held on January 6, which preceded the deadly U.S. Capitol riot.

Sheldon Whitehouse of Rhode Island and his team of senators sent a letter to the committee’s chair and vice chair saying that the Senate Ethics Committee should also offer strong disciplinary action including expulsion or censure if facts uncovered their roles in the above events.

The letter stated that this team of senators did not undermine the right of the Republican senators to object to the  electoral college votes but they wanted to know if the senators had failed to put their loyalty to the highest moral principles and to the country above loyalty to persons, party or Government departments.

The letter also wanted investigations to clarify whether there was engagement in “improper conduct reflecting on the Senate” in connection with the violence perpetrated on that day as both the senators voted to reject the electoral votes, even after the riots were quelled and the counting process resumed  amidst tight security.

The letter also named Reps. Andy Biggs, Paul Gosar and Mo Brooks as alleged co-architects who could have played a major role in the rally.

Hawley said in a statement that this latest effort is a flagrant abuse of the Senate ethics process while Cruz told reporters that he had played no role in inciting violence and that debating a question of the Constitutional law on the floor of the Senate was the antithesis of “trying to resolve conflict through violent terrorist attack.”

The Ethics Committee is chaired by Chris Coons, D-Del. and James Lankford, Republican from Oklahoma is the vice chair. The committee declared to comment. Incidentally Lankford had initially signed off when Ted Cruz first challenged the electoral vote results but he withdrew his support after the Capitol riot.