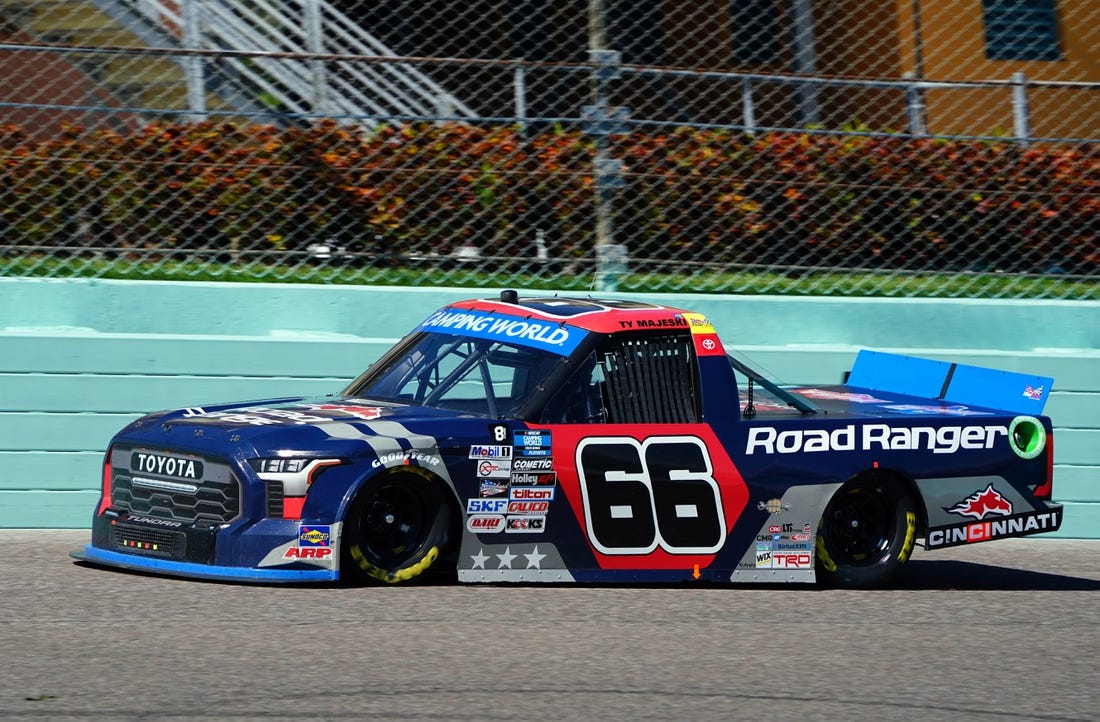 Ty Majeski took a big step to solidify himself as the championship “favorite” with a victory in Saturday’s Baptist Health Cancer Care 200 at Homestead-Miami Speedway — the NASCAR Camping World Truck Series regular season finale to set the Championship 4 field for the 2022 title race in two weeks.

The 28-year old Wisconsin native led a race-best 67 of 134 laps, his No. 66 ThorSport Racing Toyota Tundra crossing the finish line a convincing 4.524-seconds ahead of Zane Smith’s No. 38 Front Row Motorsports Ford.

Behind Majeski, it was a tight and valiant rush to the checkered flag to set the four-driver Playoff field. Stewart Friesen finished third, but ultimately missed making the Championship 4 by a single point — as reigning series champion Ben Rhodes turned in a sixth-place run (all he needed) to secure that position.

Majeski, Zane Smith, Chandler Smith and Rhodes will now race for the big trophy on Nov. 4 at Phoenix Raceway.

Saturday’s work at the 1.5-mile Homestead oval marked Majeski’s series’ best second win of the Playoffs and second win of his young career. He makes the Championship Four in only his first year competing fulltime in the series and said he doubted if anyone had him penciled in for the championship round.

Majeski said he had no idea what the points situation was behind him. “I knew it was close,” he said, adding that he holds a lot of confidence in his ThorSport team for the upcoming season finale.

“We certainly have momentum on our side winning two of the last three,” Majeski said. “I can’t really say who the favorite is and who isn’t. But I really like my chances going to Phoenix.”

Zane Smith, 23, the regular season champion, is a three-race winner this season and will be making his third run at the championship — the most Final Four appearances among the 2022 title-eligible drivers.

Chandler Smith, 20, a three-race winner in the Kyle Busch Motorsports Toyota, finished 10thon Saturday and will be making his debut in the Championship 4. He is the defending Phoenix race winner.

Rhodes, 25, who won at the Bristol, Tenn. dirt track, will be defending his title. It’s only the second time he’s advanced to the Playoffs’ final round, and it was a tense afternoon for the driver of the No. 99 ThorSport Toyota.

“Fighting with my teammates really hard there for the last few laps,” Rhodes said. “Every spot matters and we got in by one point. I’m just really happy we had a good showing for this Toyota Tundra.

“Really happy to have an intense race for them, give them some excitement” Rhodes said of guests this weekend. “But man it was harder than it should have been. Just glad we can defend the title really. ”

Friesen, Eckes, Grant Enfinger and John Hunter Nemechek were the four drivers who did not advance to the Playoff’s final round. Enfinger essentially needed to win the race to move on, but he suffered a tire problem midway through the race and never recovered, ultimately finishing 14th.

Nemechek also had a long, rough afternoon. He hit the wall in the No. 4 Kyle Busch Motorsports Toyota and had to pit two different times for cut tires that ultimately left him six laps down. He finished 35th among the 36 cars.

“Frustrating day, just can’t recover two, three laps,” Nemechek said. “On me. But proud of all the guys at KBM. It’s been an up-and-down season, but overall we’ve been in contention almost every week. Proud of them and grateful for the opportunity.

“Sucks we won’t be racing for the championship,” he added. “But one last race to go win with this bunch and hopefully we can go get it done.”

The trucks have an off-week next week and return Nov. 4 for the Lucas Oil 150 at Phoenix Raceway (10 p.m. ET, FS1, MRN, SiriusXM NASCAR Radio). Chandler Smith is the defending race winner.