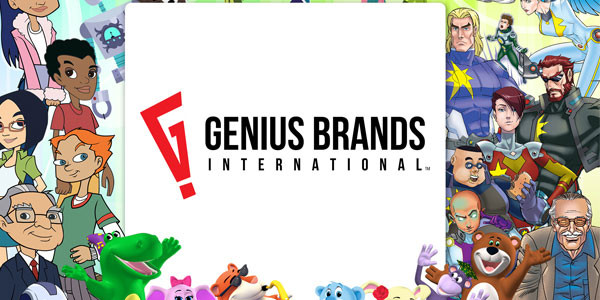 Genius Brands International is a Global publicly traded company on the NASDAQ: (GNUS)  that creates animated and licensed entertainment content for children. Their portfolio features enrichment and entertainment with “Content for a Purpose” for children in the toddler to tweens age groups.

Arnold Schwarzenegger is now a significant investor in Genius Brands stock after receiving warrants on the stock advanced against his profit participation in the animated children’s series, Stan Lee’s Superhero Kindergarten. Walmart sells the Rainbow Rangers’ toy line from Mattel, hundreds of other product SKUs coming to retail over the next year.

Additional Rainbow Rangers branded products at retail include two DVDs from Distribution Solutions available at Walmart and Target stores across the US and available  at Amazon; costumes and accessories at online retailers, including Walmart, Amazon, Party City, and halloweencostumes.com; apparel from Bentex on Amazon; storybooks from Macmillan Publishing at Target.com, Walmart.com, and Barnes & Noble; bicycles from Dynacraft at Walmart.com and Kohl’s.com; and stationery items from Inkology on Amazon.

There has been  a lawsuit against the company. The lawsuit continues to allege that Genius Brands made false and misleading statements about Nickelodeon’s claimed broadcast expansion of Genius Brands’ Rainbow Rangers cartoon, as well as its growth potential and overall prospects as a company.

But don’t let a potentially frivolous lawsuit pull you away from making an investment in the company- The stock traded an enormously high volume of shares on Friday October 9th, 2020.

Genius Brands holds $55 million in cash on its balance sheet and ZERO debt.

GNUS has seen its stock manipulated by the shorts, most notably- Citron and Hindenburg Research. Shorting selling is an investment or trading strategy that speculates on the decline in a stock or other securities price. Shorts can make a lot of money trading on bad news. And, you never know who is really starting lawsuits for unethical reasons playing games to make massive amounts of money on Wall Street.

The CEO Andy Heyward is highly experienced in the entertainment industry. The last company he managed was a sold to Disney. We believe that Apple, Sony, Netflix, Disney or Amazon could buy the company. It is a strong takeover target with much upside potential.

Why did hedge funds buy over 22 million shares when the price dropped from $11 to under $2?

Why is someone loading up on October call options?

Why did Arnold Schwarzenegger elect to receive warrants to purchase shares of the Company’s common stock as an advance against his profit participation in the new animated children’s series, Stan Lee’s Superhero Kindergarten?

Why is the company putting in place an incentive plan for senior management and employees?

Why is CEO Andy Heyward one of the company’s largest shareholders? Why did he buy 11.6 million shares last quarter?

They are all betting on a higher share price!

CWEB Analysts view NASDAQ (GNUS) as a long term growth and a great addition to your investment portfolio with an upward momentum of $10- $15 by 2021 with potential of direct take over target and expanding worldwide licensing distributions.

What Is the Future of Draft Kings Post Pandemic?

Police Officer Recalls Capitol Riots Horrors Being Crushed in Doorway by Rioters Warning: Disturbing Video
ShareTweetSharePin1    Last Wednesday, Officer Michael Fanone was on desk duty. With the riots happening in the Capitol, he...
Mexico Exonerates Ex Defense Minister on Drug Charges
ShareTweetSharePin1    An ex-defense minister, General Salvador Cienfuegos, has been exonerated in a drug case. U.S....
Google Store Uses Prominent Banner Message to Commemorate Fitbit Acquisition
ShareTweetSharePin1   Google has acquired Fitbit (Update: DOJ is still investigating) The Google Store is the place to go to...
Xiaomi Is the latest to be added to the U.S.’s list of alleged Chinese military companies.
ShareTweetSharePin1    Xiaomi is the latest Chinese company to be added to the U.S. military list by the Trump...
It’s official: Anne Hathaway hates her name
ShareTweetSharePin1    William Shakespeare said, “What’s in a name? That which we call a rose by any other name would...
Spatial Audio feature in AirPods could get additional support from Netflix
ShareTweetSharePin1    A report from a French site iPhoneSoft has indicated that Netflix has been working on giving...
Ivanka Trump Jared Kushner spend  over $100,000 for separate toilets for Secret Service Staff
ShareTweetSharePin1    On Thursday, the Washington Post reported that Jared Kushner and Ivanka Trump spent over...
JP Morgan Says Biden’s stimulus plan could drive funds back to the U.S. and away from Asia
ShareTweetSharePin1    U.S. President-elect Joe Biden’s stimulus plan amounting to a whopping $1.9 trillion for...
Biden’s proposed Covid relief package to have $1400 stimulus checks and additional funds for vaccinations
ShareTweetSharePin1    In a prime time address on Thursday, President-elect Joe Biden announced a $1.9 trillion relief...
Your tongue can tell if you have coronavirus or symptoms to look out for
ShareTweetSharePin1      One in five people with Covid still present with less common symptoms that dont get on...
South Korea’s highest court upholds former female President’s 20-year Prison sentence
ShareTweetSharePin1       The Supreme Court of South Korea has upheld the 20-year prison term of former President...
A sneak peek at accessories that can be synced with Apple devices at CES 2021
ShareTweetSharePin1    CES 2021 lacks the pomp and show of earlier avatars but there are some companies who are...
Midwestern Pet Foods Voluntarily Expand Recall As 70 Dogs Die
ShareTweetSharePin1    Midwestern Pet Foods Inc. has expanded its voluntary recall of pet foods after 70 dogs have died...
Federal Regulators Ask Tesla to Recall Certain Car Models Which Would Amount to A 158,000 Recall
ShareTweetSharePin1    The National Highway Traffic Safety Administration has asked electric-car maker Tesla to recall...
President Trump permanently banned from Snapchat
ShareTweetSharePin1   President Donald Trump’s Snapchat account has been permanently banned by social media app Snapchat.  On...
2 Virginia police officers were arrested after taking a selfie inside the Capitol during the violent deadly insurrection
ShareTweetSharePin1      During national news coverage of the aforementioned events, video footage which appeared...
Social Media Scandal causes recast of Armie Hammer’s role in ‘Shotgun Wedding’
ShareTweetSharePin1      Armie Hammer, actor, has stepped down from his role in the romantic adventure film,...
Trump impeached by House for role in violent and destructive Capitol riots in first time Historical event
ShareTweetSharePin1     The House has voted to impeach President Donald Trump for inciting protesters to insurrection...
Apple will give $100 Million for racial equity and justice initiative projects to challenge systemic racism
ShareTweetSharePin1  Commitments build on Apple’s $100 million pledge and include a first-of-its-kind education hub for...
Violent “Ndrangheta clan” to stand on trial in Italy: Biggest mafia trial in decades
ShareTweetSharePin1   On Wednesday a huge trial against the “Ndrangheta clan” in Calabria began amid tight security. A...
Five Pointers to Know If You’re Ready for The Future of Work
ShareTweetSharePin1    Change is inevitable and always has been, hasn’t it? However, the 21st century has seen the...