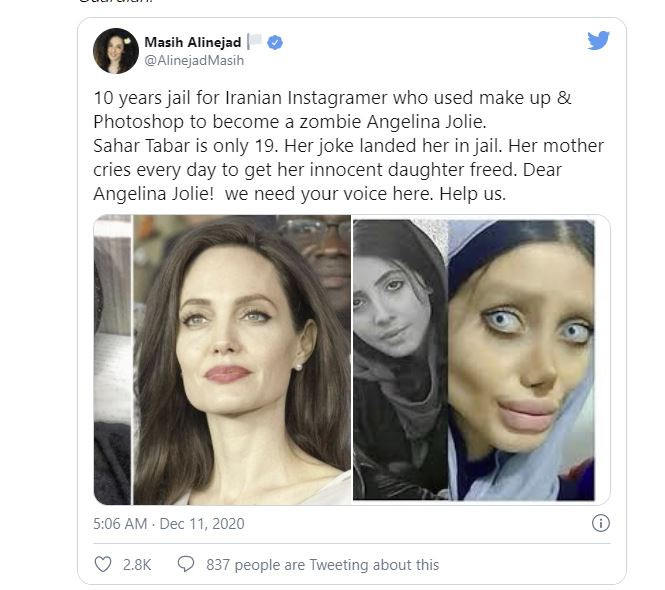 Sahar Tabar, whose real name is Fatemeh Khishvand, is an Instagram influencer who got  followed by a few hundred thousand people, 486,000, when she posted photos of herself made up as a zombie version of Angelina Jolie.

Although it began as a stunt or a joke, it had terrible repercussions for the young 19-year-old as she and three other female Instagram influencers were arrested on October 5, 2019, in Iran. The Tasnim news agency reported that she was charged with blasphemy, inciting violence, gaining income through inappropriate means and encouraging youths to corruption.

She said in an interview: “This is photoshop and makeup. Every time I publish a photo, I paint my face in an increasing funny way. It is a way of expressing yourself, a kind of art. My fans know that this is not my real face.”

Iranian journalist Masih Alinejad told MailOnLine that she had spoken to Tabar’s lawyer who confirmed a ten-year imprisonment for promoting public corruption. In a tweet, the journalist appealed to film star Angelina Jolie for help.

Capitol Violent Rioter Garret Miller Charged over Threat to Kill Alexandria Ocasio Cortez
Miller allegedly tweeted, “assassinate AOC,” on the day of the siege, according to court documents, CNN reports....
Wisconsin Judge has Modified Release Conditions of Kenosha Killing Suspect  Kyle Rittenhouse
According to prosecutors Kyle Rittenhouse, the teen charged with killing two men during the protests at Kenosha, was allegedly drinking...
QAnon Shaman Lawyer Says That Client Jake Angeli claims he was “duped” by Trump
Al Watkins is a St. Louis attorney who is representing ‘QAnon Shaman’ Jacob Angeli Chansley. The attorney said that his client has...
Singer Adele 32 and CEO husband Simon Konecki 46 Reach Divorce Settlement After Two Years
Adele and her husband have finally announced that they have reached a divorce settlement after almost two years. The couple separated...
Many Newspaper Front Page Headlines Across The World Quote Biden’s “Democracy has prevailed” - “Don’s gone…let’s go Joe!”
Today, less than 24 hours after Joe Biden has assumed the role of President of the United States of America, newspapers worldwide...
MyPillow’s Mike Lindell says Bed Bath & Beyond, Wayfair and Kohls have stopped selling products over vote fraud support
Monday night Lindell confirmed to KARE 11 that MyPillow products were pulled from Bed Bath and Beyond, Kohl’s, HEB Stores, the Canadian...
Jennifer Lopez replies to a commenter’s claims about her looks saying she never did Botox, injectables or had surgery
Jennifer Lopez claimed that she had never done Botox or any injectables or surgery when asked by a commenter on...
Criminal probe on Trump’s New York Businesses expanded by Manhattan DA Office
Trump’s businesses in New York State come under scrutiny as the District Attorney’s office in Manhattan has expanded its criminal...
South Korea’s highest court upholds former female President’s 20-year Prison sentence
The Supreme Court of South Korea has upheld the 20-year prison term of former President Park Geun-hye.   Park Guen-hye was...
Justin Thomas uses anti-gay slur at Tournament of Champions: Apologizes and says missing putt may have made him lose judgement
On Saturday, a broadcast microphone picked up Justin Thomas’ use of an anti-gay slur. This happened in the third round of the Sentry...
Capitol Police Officer Howard Liebengood 51, Dies Today After Riot Claimed Life of Colleague Brian Sicknick
A statement from Captiol police read: Capitol Police: “The United States Capitol Police is deeply saddened by the off-duty...
Tech Giant Apple Hits Record App Store Sales Despite Tensions with Software Companies
On Wednesday Apple released its annual services report and announced stupendous sales figures. Its App store customers spent a...
Next in line for Walmart: Plans to take over health care
Walmart, the big box company  has grown by leaps and bounds during the pandemic. It has expanded its online business,...
Google is trying a short new video carousel that can play videos from Instagram and TikTok
Reports say that Google is testing a new mobile search feature that allows it to add TikTok and Instagram videos in its own carousel....
iPhone 12 is the world's best-selling 5G phone
Counterpoint Research published a report on Monday, December 21 and concluded that the iPhone 12 was the best-selling 5G phone in the month of...
Apple Top Stories: AirPods Max Review, Apple Fitness+Launched, Rumors About iPhone 13 & Apple TV
The Apple World has been buzzing with activities with new releases, new features, improvements and updates in software and hardware. AirPods...
Livestream Shopping Comes to US as Walmart-TikTok Launch New Social Partnership
Retail giant Walmart and TikTok have joined hands to offer customers live shopping and shopping friendly experiences. On Friday, a...
The Latest Offering from Walmart: Driverless Deliveries in 2021
The retail giant, Walmart has stepped up operations in the pandemic by increasing its offerings online, offering COVID-19 vaccines...
Ten Most Anticipated Netflix Series Next Year
A new year, 2021, with an abundance of binge-worthy content available, is anticipated as we reach the end of a tumultuous 2020. The...
More from business News
CWEB Breaking News CWEB Business News CWEB Celebrity and Fashion News CWEB Health News CWEB Politics News CWEB Science and Technology News CWEB Sports News CWEB US News CWEB World News CWEB Cooking Recipes CWEB Movie and Music News
%d bloggers like this: