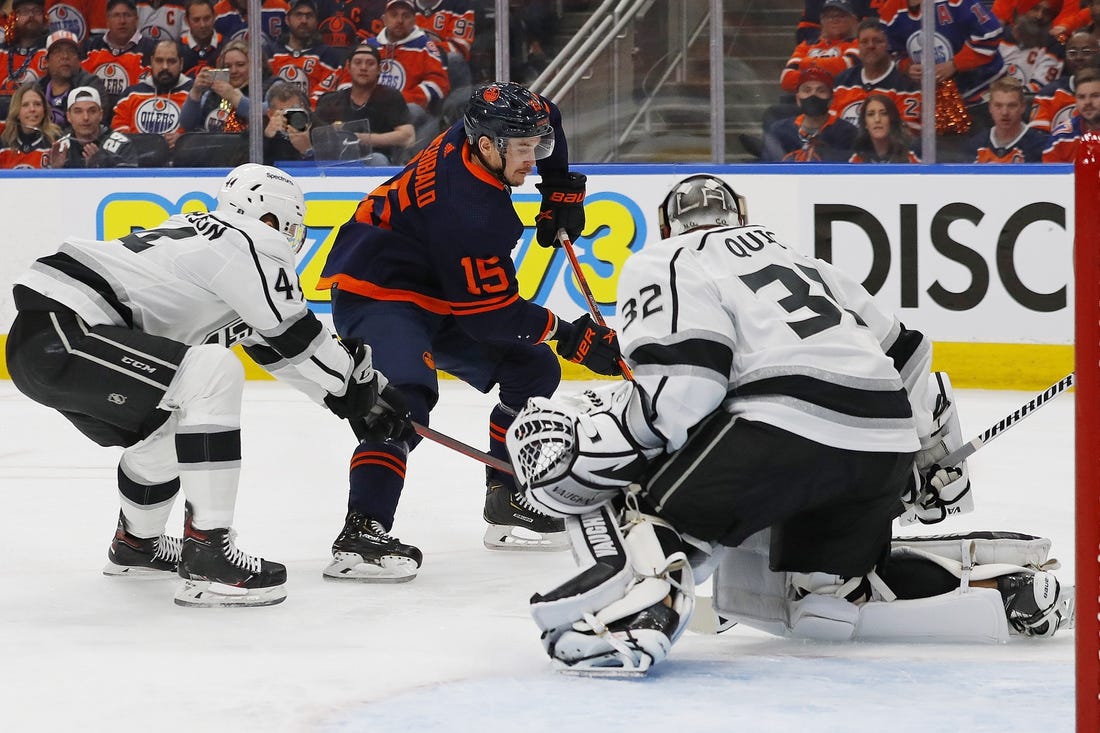 Adrian Kempe scored two goals, including the game-winner 1:12 into overtime, to give the visiting Los Angeles Kings a 5-4 victory over the Edmonton Oilers in Game 5 of their first-round Western Conference playoff series on Tuesday night.

Kempe, who also had an assist, took control of the puck in the neutral zone and then rushed up the right wing and cut inside a diving Duncan Keith and slid a forehand shot around the right pad of goaltender Mike Smith for the game-winner.

Jonathan Quick made 24 saves. It was the 90th consecutive playoff start for Quick, the eighth-longest streak in NHL history.

Leon Draisaitl had two goals and an assist, Connor McDavid had a goal and two assists and Zack Kassian also scored for Edmonton. Smith finished with 38 saves.

The Kings, coming off a 4-0 victory on Sunday in Los Angeles, picked up where they left off with a dominating first period, outshooting the Oilers 16-5, including 14-2 over the first 16 minutes.

Stecher scored the only goal in the period at the 3:53 mark with a slap shot from the top of the right circle through traffic and inside the far left post for his second goal of the playoffs.

Edmonton tied it 1-1 early in the second period on Kassian’s first goal of the playoffs. McDavid set up the score, circling behind the goal and then backhanding a pass to Kassian standing by the left side of the crease. Kassian then shoveled a shot inside the right post to snap a personal scoreless drought of nearly 83 minutes.

But Los Angeles answered with two goals in the span of four minutes midway through the period to build a 3-1 lead, taking advantage of a pair of Edmonton turnovers in its own end in the process.

Kempe made it 2-1 with his first career playoff goal. Alex Iafallo helped set up the score when he intercepted Keith’s clearing pass and fed Anze Kopitar in the slot. Kopitar then passed to Kempe in the right circle, where he fired a wrist shot five-hole on Smith.

Dustin Brown set up the next Kings score when he intercepted Brett Kulak’s clearing pass and then found Athanasiou on the left doorstep, where he flipped it into the back of the net for his first playoff goal of the season.

Edmonton cut it to 3-2 early in the third period on a power-play goal by McDavid, who scooped up a puck in the left circle and then went in and roofed a backhand shot over Quick for his second goal of the playoffs.

When Ryan McLeod was called for a four-minute high-sticking penalty on Matt Roy, the Kings increased their lead to 4-2 with a power-play tally by Danault, who redirected a Kempe shot for his third goal of the playoffs.

Edmonton rallied to tie it on a pair of goals by Draisaitl, the first with the Oilers short-handed. The second came on a power play, when he one-timed a crossing pass from McDavid from the bottom of the right circle for his fifth goal of the playoffs with 4:52 remaining in regulation.