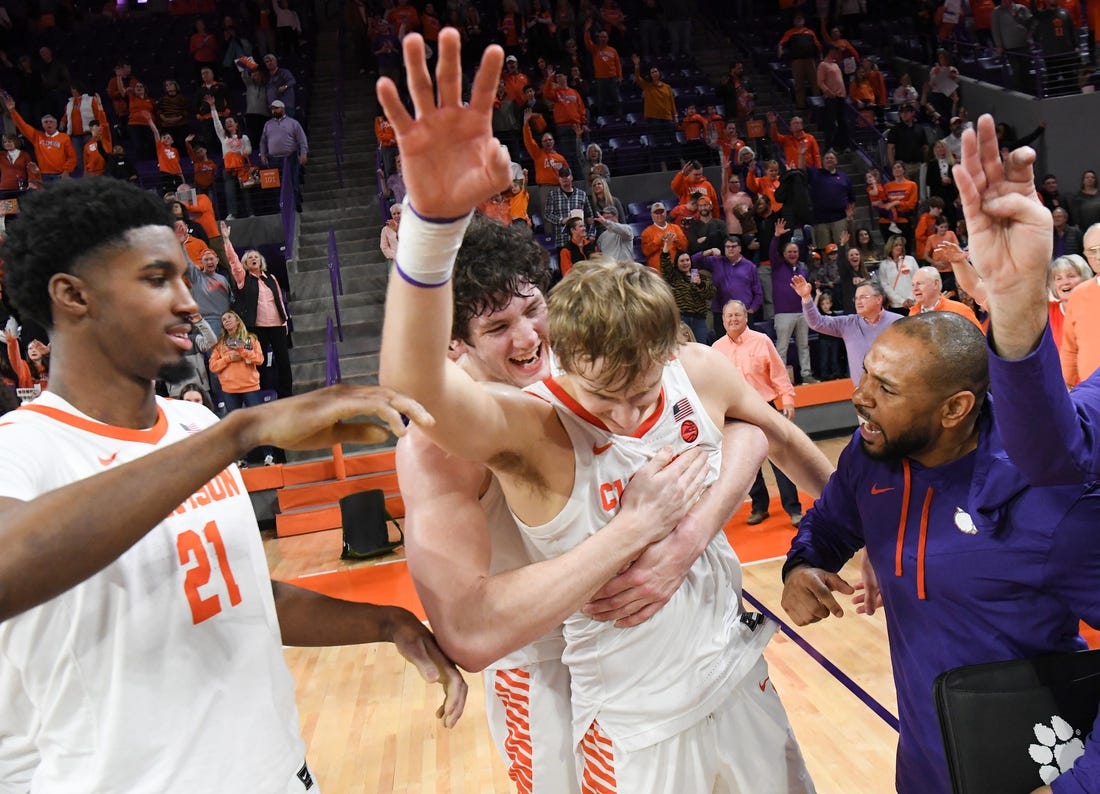 No. 24 Clemson will look to remain atop the Atlantic Coast Conference when it hosts struggling Georgia Tech on Tuesday.

Hunter Tyson’s 3-pointer with 12 seconds left was the difference for Clemson after the Hokies’ Hunter Cattoor missed a 3-pointer in the final seconds.

Tyson, who had missed five of his first six 3-point shots, made the most important one as he finished with 12 points and 10 rebounds.

“I just felt like he was going to make a play,” Clemson coach Brad Brownell said. “He had the option. He could shoot the three, he could drive, he could throw it to PJ (Hall). He could do different things. But I told him, ‘If you’re open, shoot it.'”

Hall scored a game-high 20 points and grabbed eight rebounds for the Tigers, who have won eight of their past nine games and 12 of their past 14.

Clemson’s eighth league win matched its total from all of last season when it went 8-12 in conference play.

After sweeping the two-game series against the Hokies, the Tigers will look to do the same to the Yellow Jackets, who fell to visiting Clemson 79-66 on Dec. 21.

The Yellow Jackets are coming off a disappointing outing against the Orange.

After Syracuse took a 52-39 lead with 13:12 remaining, the Yellow Jackets countered with a 15-7 run to pull to within 59-54 following Miles Kelly’s 3-pointer with nine minutes left.

But that’s as close as the Yellow Jackets would get. The Orange responded by scoring 10 of the next 13 points to push their advantage to 69-57 with 5:02 to play.

The Yellow Jackets were led by Dallan “Deebo” Coleman, who went 6 of 9 from the field, including 5 of 8 from distance, to finish with 17 points. Kelly chipped in 13 points, four rebounds and four assists, while Jalon Moore finished with 11 points and a team-high five rebounds for Georgia Tech.

“We just had some stretches there where we are not scoring the ball and just not putting the ball in the basket,” Georgia Tech coach Josh Pastner said. “Like I said, we gotta get to 70. Look, I understand losing stinks, losing is no fun and our results to this point are not acceptable.”

In Clemson and Georgia Tech’s last meeting, Hall had 25 points and 10 rebounds, while Galloway, Hunter and Tyson scored 14 points apiece as Clemson led by 14 at halftime and never looked back.

Georgia Tech was led by Kelly’s 17, while Kyle Sturdivant and Moore added 14 and 12 points, respectively.

Kentucky pulls away from Ole Miss to extend streak

No. 8 Kansas downs No. 7 Kansas State to split season series

No. 23 Miami pulls away from Virginia Tech

What to Expect From MKS Instruments’ Upcoming Q4 Results?

No. 10 Texas prepares for Big 12 battle with Oklahoma State
No. 12 Iowa State, No. 5 Kansas State set for Big 12 showdown