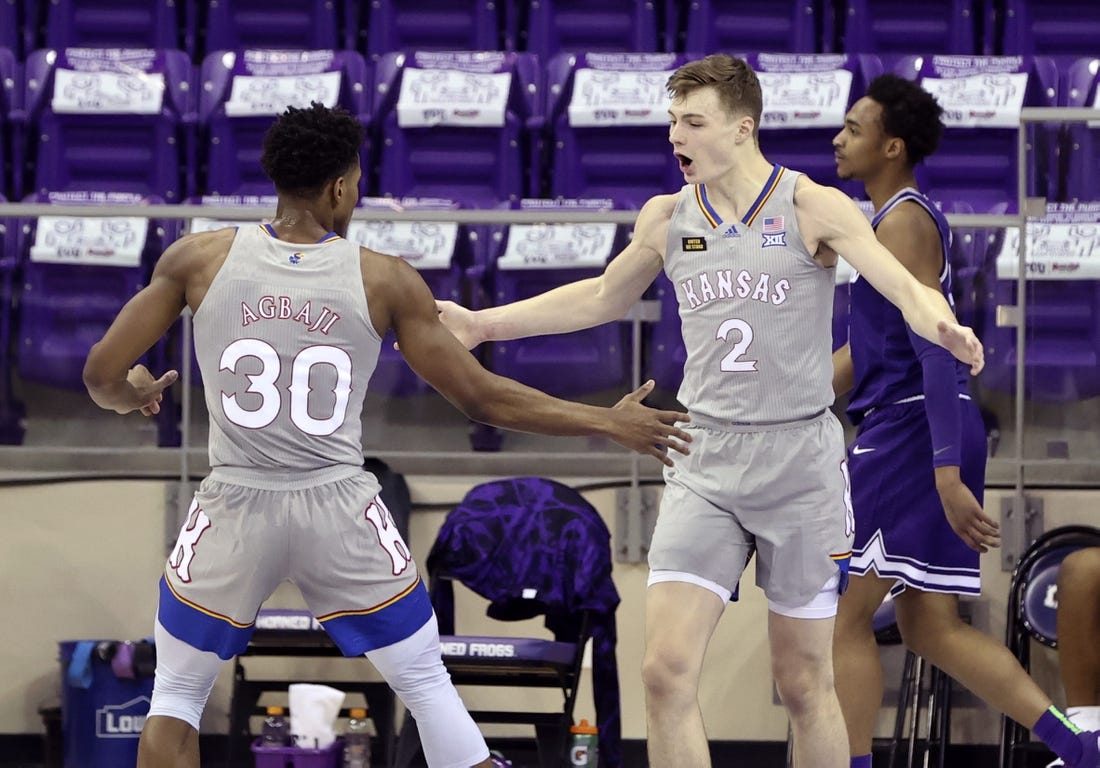 Agbaji was named Most Outstanding Player of the Final Four after the Jayhawks defeated North Carolina 72-69 in the national championship game earlier this month.

Braun indicated he will retain his college eligibility in case he elects to return to school.

Both players made their announcements on social media.

“From start to finish, this entire season felt like it had been scripted,” Agbaji said. “A season I’ll remember forever. One I’ll never take for granted. …

“No matter where basketball takes me — I’ll always be a Jayhawk. With that said, I would like to declare for the 2022 NBA Draft.”

Agbaji is the 31st consensus first-team All-American in Kansas history and finishes his career ranked 15th in school history with 1,652 points and fourth with 250 3-point baskets.

Agbaji averaged 18.8 points and 5.1 rebounds and made 103 3-pointers in 39 games this season. He was a unanimous choice for Big 12 Player of the Year honors.

Agbaji’s top performance during the NCAA Tournament came when he scored 21 points and was 6 of 7 from 3-point range as the Jayhawks routed Villanova 81-65 to reach the title game. He scored 12 points in the win over North Carolina.

Kansas coach Bill Self sees Agbaji being selected in the upper half of the first round of the draft.

“We believe Ochai has a chance to be a lottery pick,” Self said in a news release. “The process that he went through last year, in returning, helped him tremendously. It’s obviously time for Ochai to move on and what a great way to go out — being a Big 12 champion, a Big 12 Tournament champion, a first-team All-American, the MOP of the Final Four and a national champion. I don’t believe anyone could have scripted a better ending to Ochai’s career at Kansas.”

Braun, a junior, averaged 14.1 points, 6.5 rebounds and 2.8 assists in 40 games while helping the Jayhawks win the national title.

“Just a kid from Kansas. That’s where I started this journey. Now, three years later I’m a National Champion,” Braun wrote. “None of that would be possible though, without the best teammates, coaches, and fans in the world. To say I love Kansas would be an understatement. This place is beyond special. No matter where life or basketball takes me, I will be a Jayhawk forever and represent this program to the best of my abilities.

“With that being said, after talking with my coaches and family, I would like to declare for the 2022 NBA draft.”

Braun contributed 12 points and 12 rebounds in the title-game victory over North Carolina. He scored in double figures in five of the Jayhawks’ six NCAA Tournament contests.

“We all believe Christian is a first-round talent,” Self said in a news release. “We think he has a shot to go high in the draft and we are very hopeful that he does. If he doesn’t get the feedback, he wants to keep his amateur eligibility available to him and keep his options open to return to school.

“I honestly believe if Christian performs like he is capable of performing, he’s a guy who is talented enough that the feedback he’ll receive is one that he can be a high draft pick and then it will be Christian’s and his family’s decision to do whatever they want to do after that.”