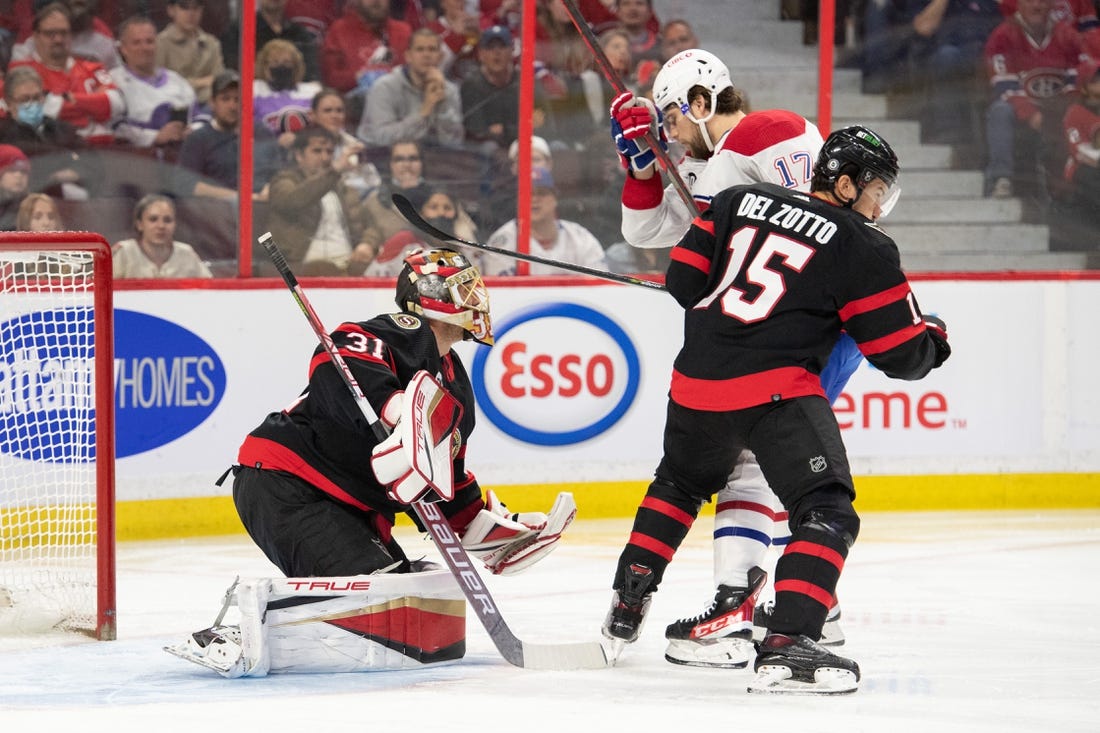 Mark Kastelic scored his first two NHL goals, and got into a fight, as the Ottawa Senators used a five-goal second period to win their third in a row Saturday night, 6-4 over the visiting Montreal Canadiens.

The loss was Montreal’s eighth in a row.

Parker Kelly and Austin Watson each had a goal with an assist, Josh Norris posted his 34th goal and Anton Forsberg made 44 saves for the Senators (31-41-7, 69 points), who snapped an 0-2-1 home rut during a chippy affair that featured 15 total penalties. Playing in his 13th NHL game, Kastelic scored his milestone goal just 2:33 into the contest, then immediately got into a tussle with Montreal’s Michael Pezzetta.

Playing one night after the death of legend Guy Lafleur, who was honored with a pregame video tribute Saturday, Montreal (20-48-11, 51 points) got a pair of goals from Rem Pitlick and Cole Caulfield’s 20th. However, Carey Price stopped just 20 of 26 shots to remain winless in four 2021-22 starts as the Canadiens dropped their eighth straight in regulation for the second time in three months.

Tied 1-1 after a period, Ottawa scored 44 seconds into the second when Watson batted in Nick Holden’s shot from the blue line. Kelly put Ottawa up 3-1 via a two-on-one with 13:17 to play in the second. Just 32 seconds later, Norris scored, and 35 seconds after that, Kastelic made it 5-1.

Montreal outshot Ottawa 16-6 in the first period, and tied it at 1-1 with 4:03 left in the opening frame. Jake Evans flung the puck into the slot for Pitlick to snap a 13-game goal drought.

Caufield stopped the second-period bleeding for Montreal when he took a back-handed pass from ex-Senator Mike Hoffman to make it 5-2 with 11:17 to play in the period. According to Sportsnet, Caufield is the first Montreal rookie to record at least 20 goals since Chris Higgins in 2005-06.

Joel Edmundson’s drive with 2:43 left in the second got the Canadiens within two. But just 43 seconds later and Ottawa short-handed, Alex Formenton broke free to beat Price and put Ottawa up 6-3.

Pitlick’s second of the night came with 11:41 left in regulation.