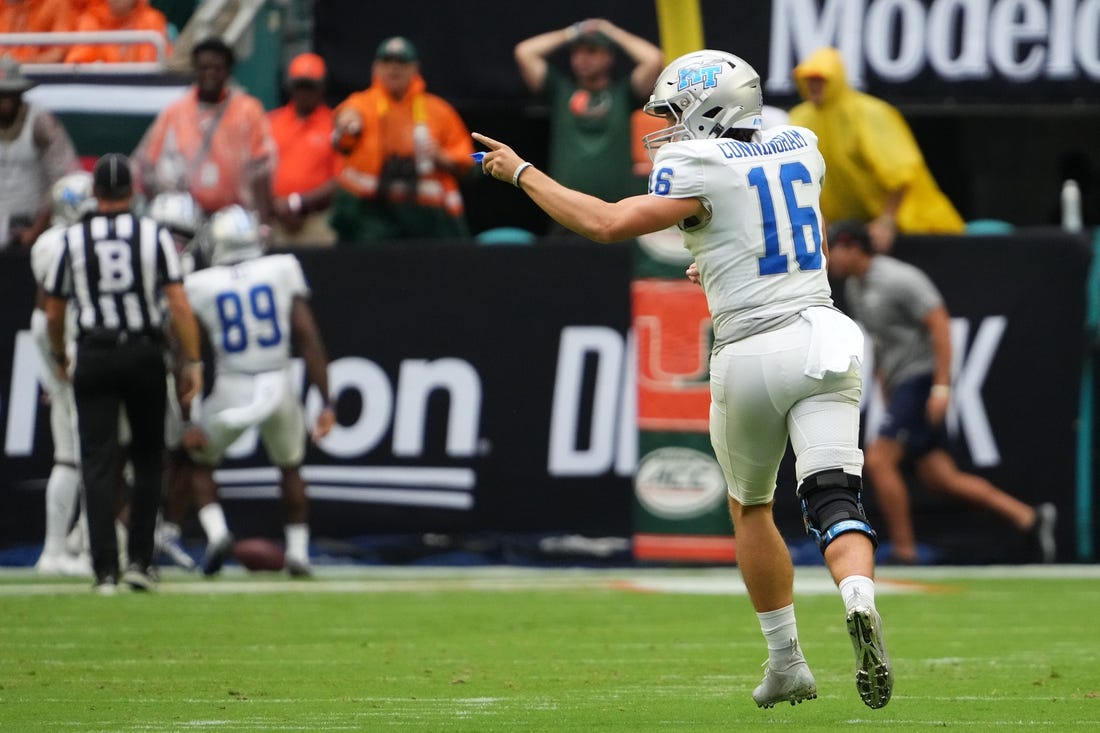 Chase Cunningham passed for 408 yards and three touchdowns and ran for another score as the visiting Middle Tennessee State Blue Raiders upset the 25th-ranked Miami Hurricanes, 45-31, on Saturday afternoon.

MTSU’s DJ England-Chisolm caught two passes for 169 yards and two scores. Jaylin Lane had four catches for 130 yards, and Elijah Metcalf had one catch for a 69-yard score.

The Hurricanes (2-2), who have lost two straight games, benched star quarterback Tyler Van Dyke in the third quarter in favor of Jake Garcia.

MTSU (3-1) knocked off an Atlantic Coast Conference team for the first since beating Syracuse in 2017.

The Hurricanes, who lost 17-9 last week to Texas A&M, struggled in the first half on Saturday, extending their streak to six consecutive quarters without a touchdown.

Miami turned the ball over on its first three possessions, falling behind 24-3 in the second quarter. All three turnovers occurred deep in Miami territory.

The Canes finally scored a touchdown on a 6-yard near-lateral pass to Parrish with 1:20 left in the second quarter, cutting the Canes’ deficit to 24-10.

With 7:43 left in the third, Van Dyke was benched in favor of Garcia, who immediately led the Canes to a 72-yard TD drive. The key play was a 39-yard downfield pass to Key’Shawn Smith, which set up Thad Franklin Jr.’s 1-yard TD run.

On the first play of the fourth quarter, Miami was stopped on a fourth-and-goal incompletion. On the next play, Cunningham hit England-Chisolm on a fly pattern for a 98-yard score.

But MTSU added Frank Peasant’s 1-yard TD run with 8:42 left to put the game away.