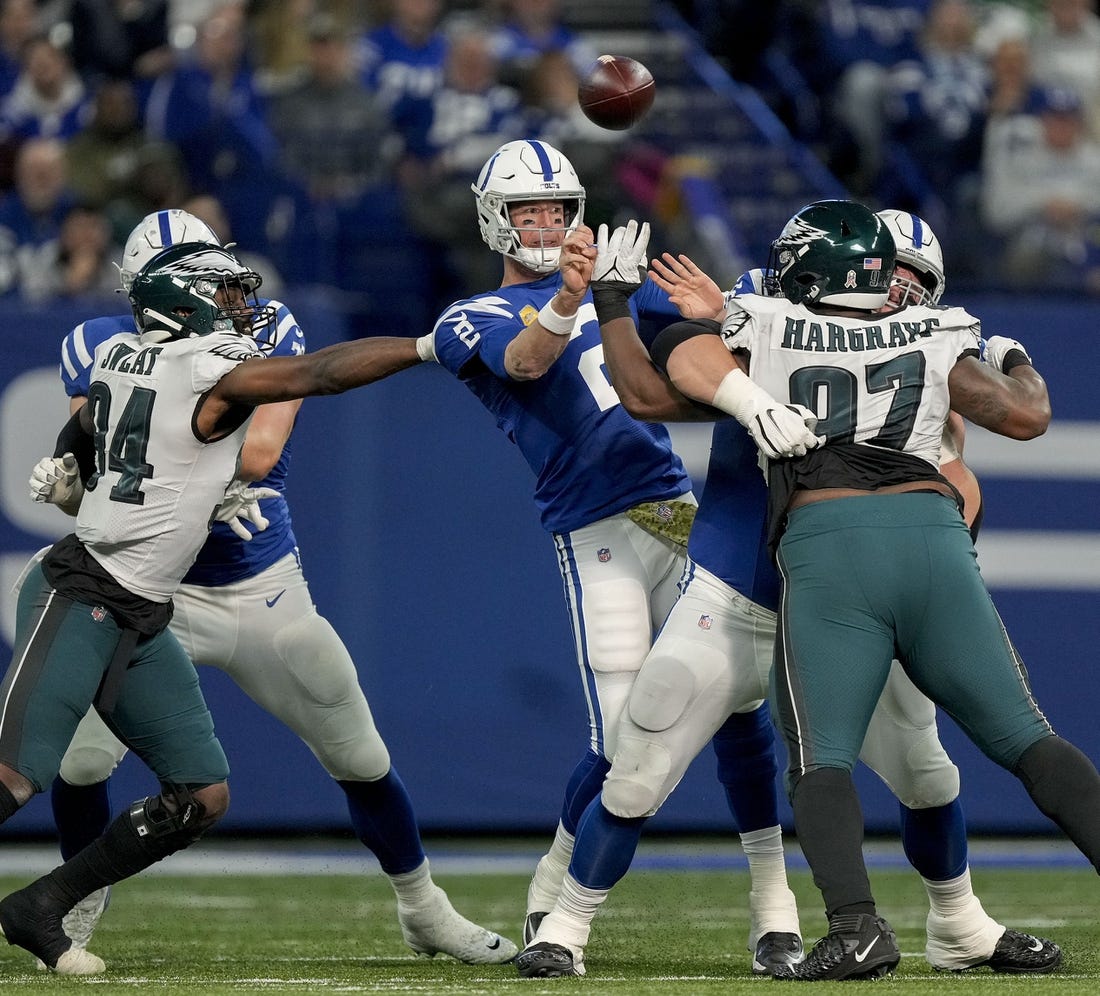 Jalen Hurts and the Philadelphia Eagles rebounded from their first setback of the season and spoiled Colts interim coach Jeff Saturday’s home debut by rallying for a 17-16 win on Sunday in Indianapolis.

The Eagles (9-1) trailed 13-3 entering the fourth quarter before Hurts threw a touchdown pass and rushed for the go-ahead score. Hurts finished with 190 passing yards and 86 rushing yards.

The Colts (4-6-1) fell to 1-1 under Saturday, who replaced the fired Frank Reich on Nov. 7. Jonathan Taylor rushed for 84 yards and a touchdown and Matt Ryan passed for 213 yards.

Each team fumbled on its next possession. Three plays after Taylor coughed one up near midfield, Philadelphia’s A.J. Brown had the ball punched out by Zaire Franklin and recovered for the Colts by Eric Johnson at the Indy 34-yard line.

Aided by a 39-yard pass-interference penalty and a clutch 3-yard run by Hurts on fourth-and-2, the Eagles grabbed their first lead at 17-16 on Hurts’ 7-yard touchdown run and Jake Elliott’s extra point with 1:20 left.

The Colts turned it over on downs on their final possession, with Brandon Graham picking up a big sack on third down.

The Eagles saw their streak of 14 consecutive regular-season games with at least 20 points come to an end.

Indianapolis took a 10-3 lead into the break with McLaughlin’s 51-yard field goal.

Hurts fumbled on the first snap of the second half, with Yannick Ngakoue jarring the ball loose and Grover Stewart recovering for Indianapolis.

The Colts took a 13-3 lead after the turnover on McLaughlin’s 36-yard field goal. It was the only score of the third quarter, as McLaughlin later missed wide right from 50.

Philadelphia signed defensive tackles Ndamukong Suh and Linval Joseph this week and the veterans combined on a sack of Ryan midway through the third quarter.