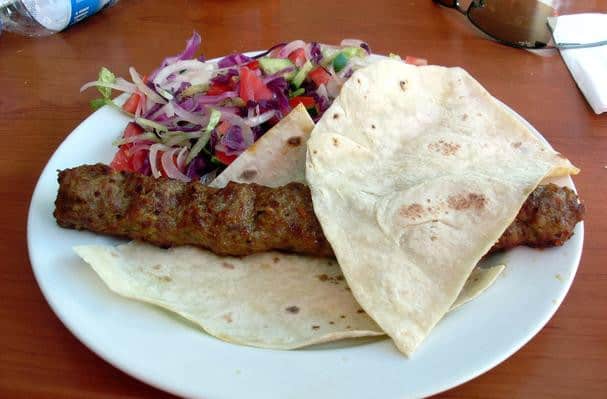 I had the opportunity of spending one day (and one day only) in Turkey. I went to the beautiful Aegean sea bordering city of Marmaris. Marmaris, once a fishing village, faced an incredible growth in the last 20-25 years. With a population of around 30,000, which may reach over 300,000 during high season, Marmaris nevertheless remains considerably attractive, specially due to its natural beauty.
In this nice town I went through 3 really unforgettable experiences:

1. Downtown Marmaris is full of tourist oriented shops, most of them selling typical Turkish products of rather suspicious quality. I fell in love with a narguile (hookah or shisha in other Arabian countries) and decided I had to take one back home with me. I also decided that it would have to be the real thing, the narguile used by the Turkish people, and not some fake tourist stuff designed to be kept on a shelf at home. And more, I didn`t want to pay the tourist price either. This was the most time consuming experience in Marmaris, but also a very pleasant one. After finding a small narguile shop where I could be attended by the owner in person, the rest was only sitting on the floor, bargaining, enjoying some nice hot sweet tea, bargaining, joking, bargaining, smoking the owner`s narguile, bargaining, and finally closing the deal. The overall experience was fun, and allowed me to get a bit closer to the Turkish soul through this nice and joyful salesman.

2. Around lunchtime loud speakers could be heard with the muezzin call for prayer, and quite a few men started moving towards a small mosque right in the center of the commercial area. I did the same. There, they sat on small stone stools and started to wash their hands, feet and face. I did the same.
They then left their shoes at the entrance of the small mosque and walked inside. Not knowing if I could walk in or not I just sneaked through the windows trying to see what was going on. A man then surprised me from behind asking what I was doing, and after a few speechless moments the following dialogue took place:

– I`m trying to see the inside of the mosque and the men praying, I said.
– Are you a muslin? He asked.
– No, I answered.

He then slowly inspected me from head to toe. I felt a few sweat drops rolling down my face, both because of the temperature, as it was 45 oC (113 oF), but also because I was feeling quite uneasy for behaving in a suspicious way, in a mosque, in a foreign country and surrounded by muslins (whom in the Occident are not regarded as a very tolerant people).

– Have you washed? He then asked.

Good, I thought, he took the sweat drops for the water I have used to wash my face just a few minutes ago.

– Yes, I answered.
– Would you like to get inside?
– Yes, I`d really appreciate that.
– Ok, follow me. Come with me to the back of the room. Once there, don`t move, don`t say a word and don`t take pictures.
Guess I don`t need to add anything else. As a matter of fact, this simple gesture of allowing me to testify what for them is a sacred ceremony, changed the way I see muslins and their religion. May Allah and the prophet Mohamed bless this unknown muslin brother for his kindness and understanding.

3.After the prayer it was really lunch time, and hence time for another meaningful experience. We also wanted a rather typical place to eat, and not those regular joints full of tourists. We went to a small diner indicated by the narguile salesman, a place lost in the small streets of downtown Marmaris were several of the shop owners and workers go to eat, and this should mean good food at low price (sorry, no name, no GPS markings, and no pictures of the facade – but I`m sure you`ll be able to find something similar with the aid of a friendly local salesperson).

The owner/chef/cook was starting to prepare “Adana Kebap”. Adana is the capital of the Adana Province, while kebap (kebab) refers to dishes of plain or marinated meat either stewed or grilled. He took about 3 kg of already grounded mutton and worked it with a rather large knife, reducing it to almost a paste.
He then cleaned 6 red bell peppers, cut them into very small pieces and added about 6 table spoons of cayenne pepper.
These ingridients were then added to the meat, which was then worked with the knife for a few moments and then with the hands, in order to obtain a homogeneous mixture. This was all, no salt was added. The mixture was then molded around wooden skewers, and grilled over hot charcoal. The skewers were removed just before serving, over pita bred and along a simple, but rather tasteful salad (tomatoes, onions, cucumbers and minced mint).
I`ve tried this recipe at home and it worked just fine. After the meal we had a taste of narguile with Turkish apple tobacco. A complete success.

1. Clean and finely cut the red bell peppers
2. Combine all the ingredients mixing well with your hands
3. Mold around the skewers
4. Grill over charcoal
5. Remove the skewers and serve over pita bread along with a simple salad (tomatoes, onions, cucumbers and minced mint).
Credit: Foodista

An Italian Favorite, Chicken Cacciatore
Here’s a wonderful recipe you can ciao down guilt-free! We’ve simmered chicken thighs in a rich tomatoey sauce loaded with mushrooms, onions and...
Posted on: 27th Jan 2021
An elegant pork roast with sage
Simple, yet elegant way to prepare pork sirloin. Ingredients 1 pork sirloin, 800-1000g 12-15 very thin slices of bacon (or pancetta) 8-10 thin slices...
Posted on: 27th Jan 2021
An American Beef Burger
Having spent so many hours developing what got to feeling like a never ending variety of burgers, like my weird and wonderful beetroot burgers. My...
Posted on: 27th Jan 2021
Amazing Braised Beef Short Ribs
Braising is one of those words that scares home cooks away from many recipes. You probably have braised a hundred times and did not even know you...
Posted on: 25th Jan 2021
Alouette Chicken Paprika
Alouette Chicken Paprika can make any boring weeknight gourmet and delicious! Ingredients 4 boneless chicken breasts halves 8 teaspoons paprika 2...
Posted on: 25th Jan 2021
Alouette Chicken Dijon Recipe
This is just great for a quiet evening at home or would make for an impressive dinner party! Ingredients 2 tablespoons olive oil 6 chicken...
Posted on: 25th Jan 2021
All Day Simple Slow-Cooker FALL OFF the BONE Ribs!
I simply dare you to find an easier way to make INCREDIBLE, tender, flavorful, FALL OF THE BONE RIBS! I Double Dog Dare you. I’m not kidding when I...
Posted on: 23rd Jan 2021
All American Sloppy Joes
A sloppy joe is an American dish of ground beef, onions, sweetened tomato sauce or ketchup and other seasonings, served on a hamburger bun....
Posted on: 23rd Jan 2021
Albóndigas With Tomatoes and Peas
All over the world you will find meatballs, but these Albóndiga of Spain have a Moorish origin with a generous use of delicious spice. These are...
Posted on: 23rd Jan 2021
Alaska pollack fish cakes
Delicious fish cakes ideal for lunch or supper. Make it the day before up to step 6, then proceed the next day. Saves time! Ingredients 400g Alaska...
Posted on: 22nd Jan 2021
Zucchini Fritters Recipe
DESCRIPTION: Those who say you can never have too much of a good thing have never had a bumper crop of zucchini. Trust me, you can only eat zucchini...
Posted on: 22nd Jan 2021
CWEB Breaking News CWEB Business News CWEB Celebrity and Fashion News CWEB Health News CWEB Politics News CWEB Science and Technology News CWEB Sports News CWEB US News CWEB World News CWEB Cooking Recipes CWEB Movie and Music News
%d bloggers like this: