Why does crowd noise matter?

Home » Why does crowd noise matter? 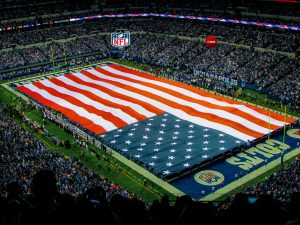 Why does crowd noise matter?

Sporting codes are restarting as part of easing restrictions amid the coronavirus pandemic. In Australia, the NRL season has just restarted, the AFL will resume on June 11, and Super Netball will return on August 1.

But, to reduce the risk of COVID-19 transmission, there’s one crucial ingredient missing: crowds.

To provide atmosphere in the absence of people, broadcasters are experimenting with canned crowd noise, much like the laugh tracks used in sitcoms. Last weekend the NRL unveiled its fake audience noise, drawing a mixed response from viewers.

Germany’s top soccer league has been using it for weeks, and the English Premier League, which returns on June 17, is even considering borrowing crowd noise from EA Sports’ popular soccer video game FIFA.

But why do we care so much about crowd noise, and why do many of us feel we need it?

It’s because it bonds us with members of our tribe, provides us a sense of connection, and acts as a psychological cue for when to pay particular attention to the action, like a goal opportunity. Without it, sport just doesn’t seem as exciting.

Read more:
From spit to scrums. How can sports players minimise their coronavirus risk?


We bond over sport

Following a team brings a sense of connection with others who follow the same team. That sense of belonging is an incredibly powerful motivation for people – it drives our thoughts and our emotions. And following a team is an emotional experience. We share the highs when they win, and the lows when they lose.

Spectators may not even play the sport they watch, but still refer to “us” and “we” when talking about their team, and use “they” and “them” for the opposition. And when the crowd supporting our team is the one making all the noise, it drives home that sense of connection.

Crowd noise is a cue

For a couple of rounds of competition, before the COVID-19 suspension, we saw games of AFL where we could actually hear the players yelling to each other. When they scored, the only noise was from the players themselves. It sounded similar to watching an amateur match at the local park. Even the most tense moments, or heroic efforts, were somehow not as exciting without the crowd.

That’s because crowd noise is a cue for spectators. We know something exciting has happened when the crowd goes nuts. When a game comes down to the last few minutes, and the scores are very close, the crowd noise adds to the tension. When my team is getting cheered on, I share in the excitement with others like me – my tribe. It seems the broadcasters are reflecting this by increasing the volume of fake crowd noise during exciting moments.

Without crowd noise, we just don’t get the same level of excitement, because we’ve learned to link excitement with crowd noise. You can have the most amazing players, with so many things to cheer on, but the only noise you’re likely to hear will be from whoever is watching with you in the lounge room (and maybe your neighbour if they’re watching too).

If we’re not sharing the moment with everyone, we’re missing out on that sense of belonging.

The most important factor in home ground advantage appears to be the crowd (though some argue that the home crowd advantage used to be larger than it is now).

Most teams have their own home ground, but in some cases, two or more teams might share a home ground. When they’re playing against each other, one team is still designated as home, and the other as away. Neither team has to travel far, and both teams are familiar with the stadium’s quirks, but the designated “home” team will have a more sympathetic crowd. A 2015 study used this exact scenario at the Staples Centre in Los Angeles to find that essentially the entire home advantage between two teams comes down to the crowd effect. So crowd noise can support players, and spur them on.

Further, home crowd noise has also been found to have an effect on referees, umpires and judges. Teams appear to be less likely to receive yellow cards in soccer when playing at their home ground, because of the home crowd’s impact on referees.

A 2010 study found referees used crowd noise as a cue when making decisions such as whether to give a yellow card for a foul.

The home crowd is more likely to be loud for fouls against their own team, rather than fouls their team has committed against the opposition. Because crowd noise is strongly associated with exciting action, and fouls are exciting, referees may not even be aware they’re using crowd noise as a cue. Further, they may just want to appease the home crowd.

Sport won’t be as exciting without crowds

I distinctly remember the moment when Nick Davis kicked that goal with 5 seconds to go to defeat the Geelong Cats and send the Sydney Swans into a 2005 preliminary final. The crowd went nuts and I loved sharing that moment with everyone. I belonged.

But if something like that happened this year, and there was no crowd to see it and cheer it on, would it be as exciting? I doubt it.

And that’s precisely why fake crowd noise is on TV. It might feel forced, and some people might not like it much, but at least there’s just a little bit more excitement with it. With any luck, we won’t have to worry about it for too long.

This article is supported by the Judith Neilson Institute for Journalism and Ideas.

This article was amended on June 3, 2020. It originally referred to the Sydney Swans advancing to the grand final after defeating Geelong. The team actually advanced to a preliminary final.

This article is republished from The Conversation under a Creative Commons license. Read the original article.