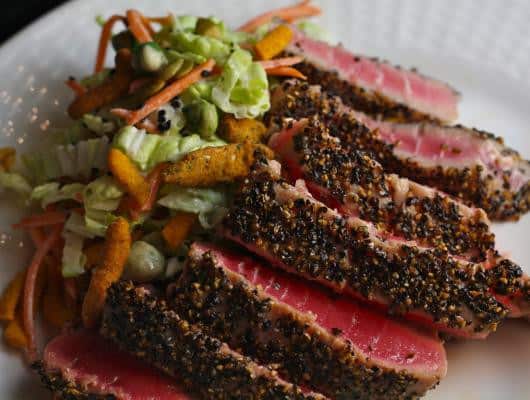 On October 9th, 2012, Tropical Foods had its Flavors of the Fall Recipe Contest with the culinary students at the Charlotte Campus of Johnson & Wales University. This recipe, Pepper Crusted Ahi Tuna with Sweet and Spicy Asian Slaw, was created by Meagan Peoples.

Follow us on Google news for more updates and Recipe News 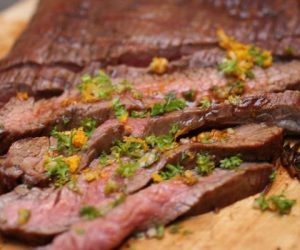 This Sunday, take advantage of the last days of summer and grill up this sweet and spicy orange flank steak from Mother Rimmy.  The steak is marinated in a sauce composed of soy sauce, sesame oil, garlic and ginger.  You'll want to... Continue reading Tasty and Easy Supper Orange Flank Steak with Cabbage Salad 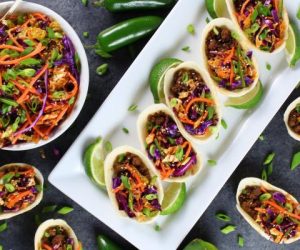 Bacon Wrapped Chicken With Mushrooms
You can use more chicken breasts for more servings, just remember 1 slice of bacon to 1 chicken...
Bacon Chicken Thighs
We all have staples in our kitchen, and bacon is one ingredient that is never missing. I believe that everything tastes better with bacon....
Bacalhau (Dried Cod Fish) Con Olive Oil and Tomato
Here's the precious Bacahlau, the very expensive dried cod fish in the Philippines and apparently cheap in Spain. But these days, you can...
Avocado Chicken Parmigiana
This is one variation of Southern Italian dish "Parmigiana", which is made with shallow-fried eggplants slices topped with tomato sauce and...
Avocado & Tomato Salad Topped with Grilled Shrimp
If you are looking for a wonderfully light but flavorful meal, this one right here is delicious!!! Its so incredibly simple, comes together...
Avocado & Feta Cheese Creamy Rice With Grilled Chicken
Avocado and feta cheese appear in several salad dishes. So, I assume they would get along well like good friends..by that I mean-the 2...
Authentic Old World Puerto Rican Sofrito
What is Sofrito? First, you must understand that Puerto Rican food came from it mix of its Spaniard conquistadors, African slaves, and...
Authentic Nigerian Beef Stew
Extremely delicious, totally gluten-free and paleo, all courtesy of the natural ingredients all cooked from scratch and to...
Authentic Jamaican Curry Chicken
Curry is a very important ingredient in Jamaican cooking since our food is a mixture of various flavors and spices from spanish, british,...

Barbequed Pork Tenderloins With Soy Orange Glaze
We really enjoy Pork Tenderloins. I try to find new and interesting ways to prepare them - so that we don't get bored with them. I think I created a...
Barbecued Beer Can Chicken
This is incredibly moist chicken, seasoned, cooked over a can of beer on the barbecue. Ingredients whole chicken spices 1...
Barbecued Baby Back Pork Ribs and Bush's Grillin' Beans
We are having some lovely weather this spring. The BBQ is out, cleaned up, and in full use here. All winter we've been craving baby back ribs. Over...
Barbacoa Beef and Egg Skillet Bake
A perfect way to turn leftover barbacoa into a hearty breakfast or brunch with baked eggs and pico de gallo. Ingredients 2...
Bamje (Bosnian Dish)
Bamje/Bamji is a Boasian and Albanian specility. It is Delicious and Tasty. My family likes it very much. Cook at your home and enjoy the dish from...
Balsamic Glazed Chicken Breasts
Balsamic Vinaigrette with brown sugar and garlic give these oven cooked Balsamic Glazed Chicken Breasts an aromatic punch of...
Balsamic Chicken & Veggie Kabobs
I love grilling, the flavor you get is just awesome and theres definitely something about cooking outside! For these Balsamic Chicken & Veggie...
Balinese Pumpkin Curry (Kare Waluh)
This delicious recipe was one that we were taught in a Balinese cooking class at Casa Luna Cooking School last week. It’s so easy to make and...
Baklava - Christmas Star - With Pistachio and Dried Cranberries
Very impressive and great for the Christmas Holidays baklava, as cranberries and pistachios definitely give a touch of sour-exotic taste to the...
Baked Ziti with Pesto Béchamel
This is a really delicious twist on the typical baked ziti. Béchamel is a white "mother" sauce because it is the base to numerous sauces. Its is...
Baked Veggie Quinoa Tots
Baked Veggie Quinoa Tots - a healthy (and adorable) veggie treat! With broccoli, quinoa, onions, garlic, and Parmesan...
CWEB Breaking News CWEB Business News CWEB Celebrity and Fashion News CWEB Health News CWEB Politics News CWEB Science and Technology News CWEB Sports News CWEB US News CWEB World News CWEB Cooking Recipes CWEB Movie and Music News CWEB Public Blog