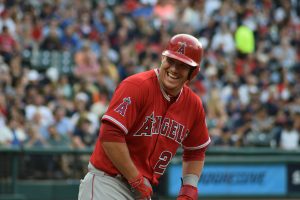 “I’m playing,” the Los Angeles outfielder said on Wednesday after speculation he was considering opting out of the 2020 Major League Baseball Season.The 28-year-old said on July 3 he didn’t feel “comfortable” playing amid the pandemic, explaining that keeping his wife  Jessica, and their first unborn child safety”is my top priority.”

Trout, who’s widely considered the Best Baseball Player on the Planet, acknowledged that he plans to attend the birth of his first child in August but isn’t sure how quarantine protocols will work that are set by Major League Baseball. But the eight-time All-Star and 3-time MVP also said that he has a name picked out for the baby and added “it’s a secret right now.”

But it’s been no secret that Trout has been very concerned because if he were to test positive at some point between now and the next couple weeks, he’d not only  miss the birth of his first-born child, he’d have to quarantine himself for 10 days and not be able to be with his wife Jessica, and newborn child, due to rules that had been agreed upon by MLB & the MLB Players Association in the beginning of July. However, Trout now feels better about players taking proper safety precautions the past couple weeks during his Angels Summer Camp Training in Anaheim, California.

“Guys have been respectful of others” Trout said. “Everybody is taking responsibility to wear a mask, do social distancing and just be safe, and we’re seeing that.The results are there. Just got to pick up a stay on it when we’re on the road,we’re going to different cities where it’s really bad right now. It’s going to be tough. As of right now, everything is great.”

But as we all know, things can change rapidly each day with what we know now about Covid-19. Just yesterday, the Washington Nationals young phenom, Juan Soto,tested positive in Washington DC  just hours before the start of the first MLB game of the 2020 season against the New York Yankees. Soto will now have to quarantine himself from the team and will need to test negative twice before he’s allowed to return to his team and game action. The tests are conducted through MLB & a private facility that was contracted, and players must wait 48 hours between tests before being able to retest. Soto is the Nationals top player and centerpiece to the 2019 defending World Series Champs and the future of their season can be impacted if Soto is to miss more than 10 days, since the season is just 60-games.

The same can be said about Mike Trout. His Angels have not made the playoffs since 2014 (the only time in his MLB career which started in 2011). Not only is he the best player in baseball, his team relies on his tremendous abilities and leadership, and if the Angels were to lose Trout’s services; even if it’s only 10 days. The Angels chances of contending or making the Post Season will be diminished.

Let’s hope for the Angels & Trout  this not the case because his teammates can’t afford to play without him. And, here’s hoping Trout & his wife Jessica, bring a healthy child into the world.